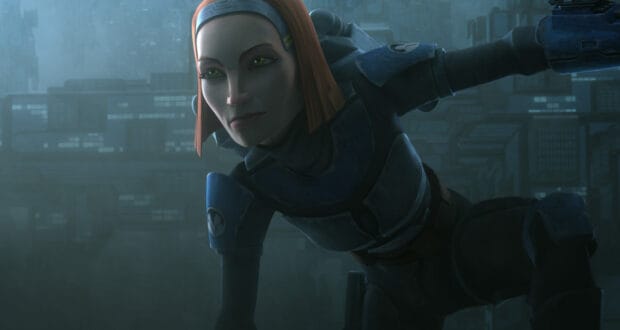 5 Star Wars Characters Who Deserve Their Own TV Shows

With so many Star Wars TV shows on the horizon, there’s no better time to consider which other characters from the faraway galaxy deserve their own shows. And there are so many to choose from – which makes it even harder to imagine who’s worthy of headlining their own Disney+ series! So far we’ve only had The Mandalorian, while upcoming shows include Andor, Obi-Wan Kenobi, Ahsoka and The Book of Boba Fett.

The truth is that there’s a huge number of characters who could justify their own shows – but would they be interesting enough? Would they be limited or long-running? It goes without saying that we want character-led shows that have a good few years’ worth of seasons in them, which is why we’ve handpicked five Star Wars characters we think deserve some attention – even if some have had plenty already!

When it comes to television, there’s perhaps nothing more interesting than a character who’s morally ambiguous. And Star Wars certainly isn’t short of such individuals – just look at the likes of Boba Fett, Han Solo and even Mando. But if we’re talking strictly about female characters, the best example that comes to mind is Bo-Katan Kryze, who also happens to be a Mandalorian (although her teal-blue armor is a lot cooler than Din Djarin’s!).

To date, Bo-Katan has appeared in Star Wars: The Clone Wars, Star Wars: Rebels and The Mandalorian, and while she always shows up to lend our heroes a helping hand, it’s obvious that she operates within a moral grey area. In The Clone Wars we first meet her as the member of terrorist cell Death Watch, and in The Mandalorian Season 2 we learn she’s after the Darksaber – which she will need to try and win from Mando through combat in the third season.

While many fans would argue that she’s probably due a lot of screen time in The Mandalorian Season 3 and perhaps even the Ahsoka series, we definitely think the character has the talent and staying power to headline her own show. There’s also a lot we don’t know about her, with two separate 14-year periods unaccounted for. Bo-Katan is played by Katee Sackhoff, who also voices the character in both The Clone Wars and Rebels.

Say what you will about the sequel trilogy, but Kylo Ren is easily the most interesting character in all three films (sorry, Rey). Not only is he very conflicted, but his arc is also the most compelling – which makes him far more entertaining to watch than Rey. While she’s not terrible like many fans make her out to be, there still aren’t any real moral challenges standing in her way – she simply keeps going from strength to strength from start to finish.

Kylo Ren, on the other hand, has plenty of backstory that we’d love to see fleshed out in his own TV show. One of the many problems with the sequels is that his turn to the dark side isn’t explained at all. We do get some insight from Luke Skywalker, but it still doesn’t explain why Ben was under the influence of Snoke in the first place. We’re also none the wiser as to why he detached himself from his parents Han Solo and Leia Organa.

There are of course novels that expand on certain things the sequel trilogy establishes, but seeing Ben Solo get a backstory just like Anakin Skywalker does in the prequel trilogy could work. With all that said, there are already rumors circulating about a potential prequel trilogy that will focus on Kylo Ren. Either way, whether it’s a series of films or a TV show, let’s hope we finally find out whether he actually killed Han Solo or not!

You could argue that Princess Leia Organa has already had plenty of screen time over the decades, having appeared in six movies (seven if you include her birth in Revenge of the Sith!) and TV shows such as Star Wars: Rebels and Star Wars: Resistance – and you’d be right. But the fact she’s so popular is proof that she’s worthy of her own TV show – although there’s a little more to it than that.

In both the original trilogy and the sequel trilogy, Leia is a pivotal figure in the wars – from both a political and military perspective. She’s also incredibly strong-willed and is able to carry scenes on her own. For these reasons alone, it’s clear that she could quite literally run the show all by herself. However, we think that a TV show about the princess should focus on her time as a teenager and young woman, many years before A New Hope even takes place.

In fact, there have already been rumors about such a show, with Millie Bobby Brown from Netflix’s Stranger Things being a favorite to play a younger version of the character. Seeing Leia growing up on the ill-fated Alderaan under the tutelage of her father Bail Organa – a secret rebel leader – while making tactical moves against the Empire gives us chills just thinking about it. But if we can’t have that, then Disney should at least make Leia an official Disney Princess!

If you’re yet to watch Star Wars: Visions on Disney+ then you might not be at all familiar with Lop from the episode “Lop and Ocho”. But while the character is brand-new, we don’t think that should rule her out from having her own TV show. Like the other eight episodes, “Lop and Ocho” clocks in at around the 20-minute mark, but in that time Lop makes quite an impression and it’s plain to see that she has a bright future ahead of her in the Star Wars universe.

The episode takes place on the planet Tao during the reign of the Galactic Empire, and follows a young Lepi called Lop who is freed from her life as a slave when she’s taken in by a human family. However, years later her sister Ocho sides with the Empire, believing that they will bring prosperity to Tao. Lop is then given the best family heirloom anyone could ask for – a lightsaber, with which she must stop her sister.

There are plenty of non-human characters in the Star Wars universe, but there’s something quite refreshing about Lop. After all, she’s a sentient, samurai-esque rabbit with her own hover droid and flying umbrella – what more could you want?! And as the episode ends on a cliffhanger, it’s possible we’ll see Lop again (even if Star Wars: Visions is allegedly not canon). With that said, we’d love to see her return in live action next time around.

It’s no mystery that the wise old Jedi has appeared in a lot of Star Wars material over the decades, including six of the Skywalker Saga movies and the entirety of long-running show Star Wars: The Clone Wars. But what is a mystery is pretty much everything about the character before The Phantom Menace – and there’s still so much to learn, which is no surprise considering the original trilogy suggests that he’s at least 800 years old!

We still don’t even know what species he is, and the only other two beings like him in Star Wars are Grogu from The Mandalorian and Yaddle, a female character who can be seen on the Jedi Council in The Phantom Menace. Giving Yoda his very own prequel TV series would give fans the chance to finally learn what he is, what planet he’s from, and what his life was like for him in the lead up to the prequel trilogy.

While George Lucas deliberately left out many details about Yoda, it’s never too late to learn more about the character. And with him being the oldest Jedi and an enormously popular Star Wars character, it’s fair to say that a TV show would go down well with fans. Perhaps the premise could revolve around his time in exile on Dagobah, where he shares stories of his past with another character. Illuminating tales they would be…

There are plenty more Star Wars characters who probably deserve their own shows, but we think these are the ones whose stories would have the most longevity. But only time will tell whether anyone on this list will end up headlining their own show. For now, we’ll have to make do with all things Star Wars on Disney+.