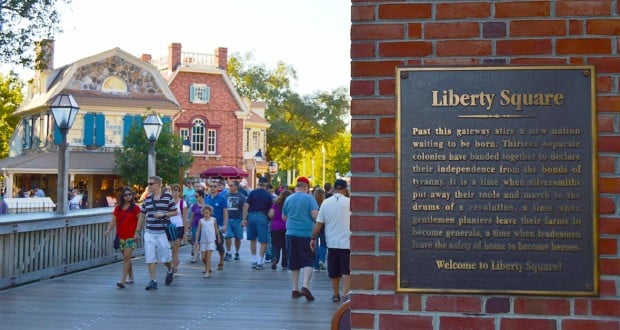 1) A History Lesson – There is a time period progression from the Haunted Mansion down to Frontierland. The Haunted Mansion is fashioned after the houses along the Hudson River in New York in the early 1700’s. As you progress through Liberty Square, there is an area with a succession of buildings, each with a front door. The addresses on the doors are two digits. Put an 18 in front of the numbers and you get the timeframe for that particular building.

2) A Geography Lesson – Along with the time period progression, there is a geographical progression in Liberty Square. It starts on the east coast with the Haunted Mansion and moves west. Watch the progression in style as you move towards Frontierland and the American west.

4) Straighten Those Shutters! – Notice the shutters in Liberty Square are all hung at an angle. This is because there was virtually no metal shipped to America from England during the Revolutionary War (they didn’t want it used for bullets). The colonials would use the metal off of the shutters for ammunition and then hang the shutters with leather. After a period of time the leather straps would stretch and the shutters would hang at an angle.

5) Where’s the Nearest Restroom? – Much of the pavement in Liberty Square is the same color to help it blend in and keep guests’ eyes looking up at nearby attractions and details. Guests who look down might notice a brown streak that is several feet wide running along the street near the curb. In traditional Revolutionary times, no indoor plumbing existed, so many people would take their waste and dump it from their windows into the streets outside. The brown pavement throughout Liberty Square is a detail which accurately represents the sewage of early Americans! Kinda gross, but a great detail to make Liberty Square feel authentic! This is why there are no public restrooms in Liberty Square. No need to worry though, restrooms are located in nearby lands.

6) That’s a big tree! – Walt Disney World Imagineers designed Liberty Square to invoke a Revolutionary-era America just in time for the country’s Bicentennial celebration in 1976 (the Magic Kingdom opened in 1971). In order to create their own Liberty Tree, Imagineers called upon their landscape engineers to transplant a 35-ton, 135-year-old oak tree from elsewhere on Disney property into the Liberty Square. One of the most difficult feats that they had performed at that point (because this was the largest tree that they had ever moved), Imagineers and landscapers were able to move the tree successfully to its new home in the Magic Kingdom using a technique created by Bill Evans, a landscaper who had been hand-picked by Walt Disney. The process, which Evans invented for Disneyland, includes drilling holes in the trunk of the tree and pruning the root system. It holds 13 lanterns, one for each of the original colonies.