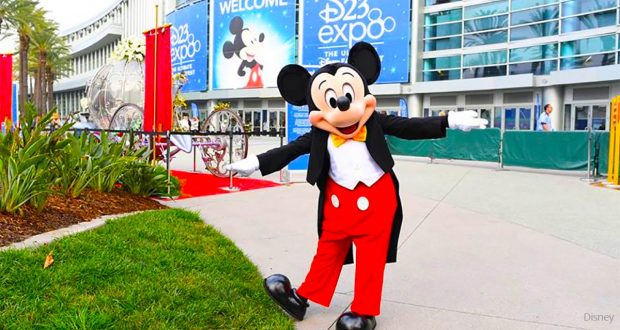 Disney’s Ultimate Fan Event, D23 is taking place in Anaheim, CA this week!  In addition to a sold-out crowd of over 40,000 attendees, Disney has announced a number of exciting additions to its’ parks across the globe.

Press release from Disney – “Walt Disney Parks and Resorts Chairman Bob Chapek welcomed nearly 7,000 fans as he unveiled more than a dozen new experiences coming to Disney parks and resorts and gave a sneak peek at much-anticipated projects in development. Several Imagineers joined the presentation by providing details of the creativity, imagination and innovation in development around the world. Chief Creative Officer of Walt Disney and Pixar Animation Studios John Lasseter also shared his enthusiasm for plans to include a larger Pixar presence at Disneyland Resort.”

Star Wars Land Coming To Both Disney US Parks To begin, both of Disney’s parks in the USA will feature an epic Star Wars Land immersive experience.  From Disney “Walt Disney Company Chairman and CEO Bob Iger announced the Star Wars project to the delight of thousands of fans in attendance.  The Jaw-dropping new lands will open with two anchor attractions – one that gives guests the chance to pilot the millennium Falcom on a customized secret mission, and one that puts guests right in the middle of a battle between the First Order and the Resistance.  Representing the largest single-themed land expansion at 14 acres each,  the Star Wars-themed lands will open in 2019.” Watch our interview with Asa Kalama – Disney Imagineer talking about the new Star Wars Themed land in Disney Parks.

Coming to Disney’s Hollywood Studios the first-ever Mickey-themed ride-through attraction, Mickey and Minnie’s Runaway Railway, where you’ll step through the movie screen and join Mickey and his friends like never before. The attraction will put you inside the wacky and unpredictable world of a Mickey Mouse Cartoon Short where you’re the star and anything can happen. Disney Channel’s Emmy Award-winning “Mickey Mouse” cartoon shorts using new technologies that transform the flat cartoon world into an incredible  “2 1/2 D” experience.This zany out-of-control adventure features surprising twists and turns, dazzling visual effects and mind-boggling transformations that happen before your very eyes. Completing the immersion so guests never have to leave the story while on a Disney vacation, Chapek announced plans that will make getting around Walt Disney World Resort even more fun. An all-new Minnievan service will provide a point-to-point transportation service in a way that only Disney can do, giving guests an even more seamless resort vacation from start to finish. Chapek also announced that the highest rated attraction at Shanghai Disneyland is coming to Walt Disney World Resort. A thrilling, Tron-themed attraction will be added in a new area near Space Mountain at Magic Kingdom.

5. Guardians Of The Galaxy

Epcot will also see the addition of a brand new E-ticket attraction based on the rockin’ and action-packed world of Guardians of the Galaxy, the next step in how guests can encounter these characters at Walt Disney World Resort.

In Future World, a new Green Mission at Mission: SPACE will take guests on a stunning tour around the Earth, and an updated Orange Mission will make the trip to Mars even more spectacular.

Adjacent to Mission: Space will be a new restaurant that will invite guests to travel high above the earth for an unforgettable dining experience. Patterned after the number one family attraction at Disneyland Paris, Ratatouille will be added in an all-new space in the France pavilion at World Showcase.

New live entertainment theater coming to Main Street, U.S.A., based on the iconic Willis Theater in 1920s Kansas City, will bring world-class entertainment to the world’s most popular park. Ken Potrock, Senior Vice President & General Manager of Disney Vacation Club, said, “The opening of Copper Creek Villas & Cabins at Disney’s Wilderness Lodge in just a few days and the announcement of our next planned development, Disney Riviera Resort, demonstrate the incredible momentum underway at Disney Vacation Club. Our members tell us over and over again how much they love the outstanding accommodations and the value and flexibility of a Disney Vacation Club Membership, as well as the unique location to our growing and evolving theme parks and the exclusive member experiences and benefits they get from our Membership Extras program.

According to Bob, this revolutionary new vacation experience will be a living adventure that allows guests to immerse themselves in an entirely new form of Disney storytelling.

“It’s unlike anything that exists today.” Bob said. “From the second you arrive, you will become a part of a Star Wars story! You’ll immediately become a citizen of the galaxy and experience all that entails, including dressing up in the proper attire. Once you leave Earth, you will discover a starship alive with characters, stories, and adventures that unfold all around you. It is 100% immersive, and the story will touch every single minute of your day, and it will culminate in a unique journey for every person who visits.” Disney unveils plans for Pixar Pier at Disney California Adventure, where the pier will take on a brand new look as more favorite Pixar characters and stories come to life, from The Incredibles, to Inside Out to even more Toy Story.

Announcing there is more Pixar in store during Pixar Fest at Disneyland Resort. Starting in 2018, this limited-time offering will include a new fireworks spectacular as well as special characters and entertainment moments.  As part of the celebration, the Pixar Play Parade will return to Disneyland Resort – this time at Disneyland Park – and the fan favorite Paint the Night Parade will move to Disney California Adventure, one of Disney’s longest parade routes.

Disney announced a brand new immersive experience featuring some of their most favorite Marvel characters.  In addition to the Guardians Of The Galaxy – Mission: Breakout ride, Disney Imagineers are going to expand that to include Earth’s Mightiest Heroes and your favorite Friendly Neighborhood crimefighter.

at Disneyland Paris will transport guests to the action-packed world of Super Heroes, including Iron Man, The Avengers, Spider-Man and more. Guests will be able to explore the Marvel Universe through its comic art, films, Super Hero costumes and more, displayed in the style of a contemporary art gallery. These are just the headlines – we’ll keep you up-to-date with more details on the above experiences as more info is released.  Descriptions from Disney