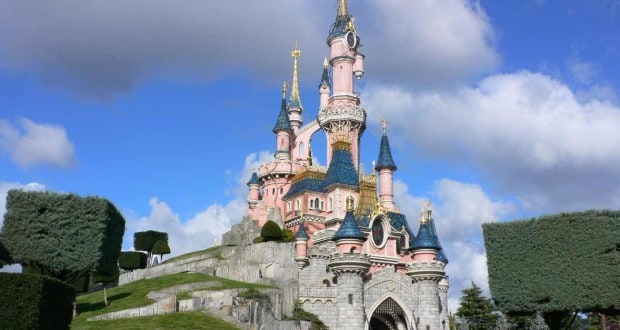 A man carrying two handguns and a copy of the Quran was arrested at a hotel at Disneyland Paris, according to French media reports.

The 28-year-old man was detained by police Thursday when attempting to book a room at Disney’s Hotel New York, which is within walking distance from Disney Village and a brief shuttle ride from the park.

A young woman was reportedly with the man but fled the scene. She was detained later at the park, the official said. The woman didn’t appear to be armed, and no other suspects are currently being pursued.

Over a dozen police surrounded the hotel Thursday evening, and a car was towed away from the parking lot, though it’s unclear whether the car was linked to the arrests.

Officials with Disneyland Paris and the French Interior Ministry had no immediate comment about the arrest.

The reports come just over two months after the coordinated terror attacks in Paris killed 130 people and wounded hundreds of others. Terror group ISIS has claimed responsibility for the attacks, which led France to declare a state of emergency and close its borders. Disneyland Paris was closed briefly after the attacks

Hey there Disney fans!  We’ve found some trivia to entertain you.

1. None of the shops in Disney World sell gum, which is why you never see any stuck to the rides or sidewalks.

2. Despite the fact that it’s illegal, several people attempt to spread the ashes of the deceased on Disney rides every year.

3. Devices called Smellitizers can be found all over Disney parks, and emit scents in certain areas to match the surroundings.

4. Walt Disney World employs almost 60,000 cast members making it one of the largest employer in the U.S.

5. The brownish winding path in Liberty Square is meant to represent raw sewage that flowed down the streets of Colonial America, since indoor plumbing wasn’t yet invented.

6. Toy Story characters used to drop to the ground when guests yelled, “Andy’s coming!” but the practice has been discontinued for safety reasons.

8. The futuristic palm trees in Tomorrowland actually fold up at dusk, and unfold at dawn.

9. Epcot’s American Pavilion is home to an American flag taken from the rubble of 9/11/2001

11. Disney Hollywood Studios was originally built as a working studio, not a theme park. The Mickey Mouse Club was filmed there with Britney Spears, Justin Timberlake, Ryan Gosling and Christina Aquilera.

12. Adult admission to Disney World when it opened was $3.50

13. Disney Transportation System is the third largest bus system in Florida with over 290 buses.

14. Epcot was originally designed to be a model community and home to 20,000 residents. You can still see a diorama for Walt Disney’s vision on the “PeopleMover” ride.

15. There is a secret basketball court for staff in the upper third of the Matterhorn ride at Disneyland.

16. Epcot’s Aquarium of the Seas is the second largest aquarium in the U.S. at 5.7 million gallons,

17. The World Showcase at Epcot may seem full, but there’s actually room for eight additional counties.

18. The aquarium in “The Seas” is so large that the “Spaceship Earth” sphere can fit inside it.

19. The 14-story “Tree of Life” in the middle of Animal Kingdom is constructed on an old oil rig.

20. More than 1.6 million turkey legs are consumed at the parks every year. They are such a fan favorite that you can buy turkey leg hats, t-shirts and other souvenirs.