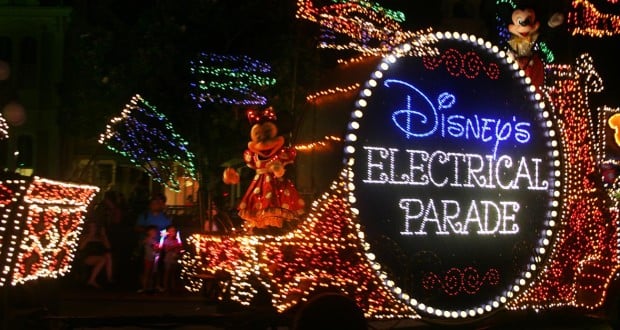 Big news out of Disney world that is sure to disappoint a number of fans who appreciate the classic Disney attractions. Disney has announced the end to one of the most popular evening entertainment offerings so that it can return to Disneyland early next year. No confirmed replacement yet, but we have some suspicions. Details below.

The Main Street Electrical Parade, Magic Kingdom Park’s long-running nighttime parade, will officially end its historic run at Walt Disney World Resort on October 9 and then head to Disneyland Resort for a limited-time encore engagement. We wanted you to be among the first to know while there’s still time to plan a trip to Walt Disney World Resort to enjoy the magic and nostalgia of the parade one last time.
Main Street Electrical Parade is a nighttime procession filled with glowing, spinning floats that honor favorite Disney characters. Animated Disney films that are represented include “Alice In Wonderland,” “Cinderella” and more. During the parade, Tinker Bell lights the way with a wave of her wand and orchestrates half a million shimmering lights synchronized to a memorable soundtrack.

If you’re planning to visit the Walt Disney World Resort for our fall experiences and see the parade one last time at Magic Kingdom Park before it ends its run, please keep in mind that Main Street Electrical Parade is not offered on Mickey’s Not-So-Scary Halloween Party nights.

While Disney has confirmed that the parade will be moving to Disneyland, there has been no announcement about what will be replacing the parade at Disney World. Many fans hope that Disneyland’s current parade, Paint the Night, will be coming to Disney World. However, Disney Cast Member Erin Glover has confirmed that, “At this time, there are no plans to bring “Paint the Night” to Walt Disney World Resort.” Paint the Night will end its run on September 5, but will run on select Holiday nights this fall. Many Disney fans are calling for the return of SpectroMagic, another amazing parade that ran for many years at Disney World. We will post news about the replacement as soon as it become available. Be sure to sign up for our newsletter for news announcements!

The nighttime parade is an amazing collection of lighted parade floats. The parade is usually run twice per night and depends on the parks hours, so be sure to grab a Times Guide when you get to the park so you know when to stake out a seat. This parade is much longer than the Festival of Fantasy parade and begins in the Town Square on Main Street and ends in Frontierland. For this parade,we like grabbing a spot near the Hall of Presidents so we aren’t caught by the parade and can sneak away if we are trying to get a ride in!