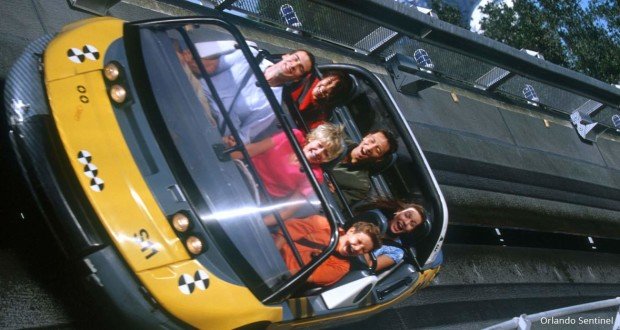 Doctor Disney is reporting some strange guest behavior At Walt Disney World’s Epcot Theme Park from over the weekend.

It was reported that during a brief stoppage of the ride for technical difficulties a guest apparently cut their seat belt and exited the Test Track car.

Doctor Disney has multiple confirmation sources from four people with first-hand knowledge of the situation.

The attraction was only down briefly, but it appears it continued on with one less passenger. During the downtime, the Guest had apparently used a knife of some sort to cut through his seat belt and exit the vehicle.

The remaining Guests reported it to cast members when the vehicle returned to the loading station. They told cast members the former rider was wandering around the area near the semi-truck inside the attraction, and not on the outside high-speed loop.

As soon as Test Track began moving again, the Guest had not returned to the car and had apparently found an emergency exit and left without being found.

The moment that the Cast Members were advised of the Guests leaving the vehicle, an emergency stop took place and the entire attraction was evacuated. The disabled vehicle was taken out of operation and the seat belt was replaced the following morning.

A search of the attraction turned up nothing.

“Rules” are not magical for most people. I, however, love rules. I love structure and knowing what’s expected. When I am at Walt Disney World, I like knowing that the park rules are on my side, acting as a safeguard against lacking common sense. Disney’s rules about dress and behavior are more about preserving a magical environment. They protect the typical guest from being unnecessarily annoyed, uncomfortable, or offended.

When guests enter your home, you may inform them of one or two important rules you keep (“we don’t smoke indoors” or “we take our shoes off in the foyer”) vs. bombarding them with a long list of restrictions (“we don’t like gum chewing”, “ that’s my spot on the couch”, “you can’t turn the TV volume above 10”). Let’s face it; the latter would make any guest feel unwelcome. Disney operates the same way. They don’t post huge signs about the rules (you won’t even find them easily on the Disney website), but they exist.
Assuming that you don’t want to search out the rules and read the fine print, here is a handy list of 8 transgressions that you should avoid. Unless, for some reason, you enjoy spending beaucoup bucks on park admission only to be asked to leave early. Then, by all means, do any of the following things until you get a FastPass+ to the parking lot.

Obviously, if it’s illegal in the “real world”, it’s not allowed in the magical world of Disney, either. Public intoxication, drug use, unlawful possession of weapons, violence, etc. are clearly going to get you kicked out, if not arrested.

Each park has designated smoking areas. For everyone’s health and happiness, stay in those areas if you are a smoker. If you smoke in an undesignated area of a resort, you will be charged a fee of up to $500.

We’ve all seen the people who “pretend” they don’t understand where the line ends, right? Don’t be that guy! Cutting in line isn’t tolerated in Disney parks, and you may be escorted out if you are caught. If you’ve ever seen the policy enforced, you’ll notice that Disney handles security in a very discrete, calm way. Guests who are not following line procedures may be asked to step aside and are lead away quietly- no big scene. My advice for those who don’t like waiting? Get to the park early or learn how to use FastPass+!

Vulgarity and Disney don’t mix. Spoken foul language and written obscenities on clothes are not allowed in the parks. You’ll probably receive a warning if you are caught, or a suggestion to turn your shirt inside-out. That being said, I’ve seen some raunchy t-shirts in the parks before, so I’m not sure how often this is enforced. What about tattoos? They count, too. Cover up the naked lady artwork on your arm or risk being asked to either “modify” your appearance (Hey, a Mickey Mouse hoodie would look great on you!) or exit the park.

5. Showing too much skin

Indecent exposure is a no-no, too. Want to turn Splash Mountain into “Flash” Mountain by lifting your shirt for the camera at the right moment? Think again! Can you wear a bathing suit top on water rides? Sure, if you pair it with shorts and shoes, and use good judgment. Just make sure it actually covers your assets- the dress code says no to teeny tiny string bikini tops or G-string bottoms. Can you run around the park wearing only your bathing suit and no shoes? No. Use common sense.

What else about clothes? Transparent materials do not make for good clothing. Disney (and, *ahem*, the rest of us) also doesn’t want to see your bottom hanging out below your cutoffs, or other parts of you through unfortunately placed tears in your shirts and shorts.

… If you even notice them. Disney does a great job of hiding their unauthorized areas, sometimes in plain sight. That unmarked door by the ice cream shop in Tomorrowland? That’s a utilidor entrance. The utilidors (a shortened form of “utility corridors”) serve as a means of allowing cast members to travel across the park quickly and discretely, among other things. Obviously, Disney does not want guests to use them.

YouTube personality “Adam the Woo” got away with accessing unauthorized areas for years, but it eventually caught up to him. His antics earned him a lifetime ban at all Disney Parks. He took sneaking around to a whole new level when he explored the abandoned Disney waterpark, “River Country”.

Could you sneak into a backstage area and pretend you don’t speak English when you are caught? “Je ne comprends pas! No entiendo!” Maybe, but I wouldn’t risk it! If you want to see the utilidors, take the Keys to the Kingdom Tour. As for the other “off-limits” areas, you’re stuck with YouTube, old family photos from the 70’s and 80’s, and your imagination.

4 wheels- good. 2 wheels- bad. Wheeled devices such as wheelchairs, motorized mobility scooters, and strollers are fine. But don’t think you’ll get away with skateboarding, riding a bike, rollerblading, or riding your Segway in the parks. You can leave the Heelys home, too- sneakers with wheels are banned.

That blue and yellow dress with the puffy sleeves is really adorable, especially with your short black hair and that nice red hair ribbon and your bright red lipstick, but don’t wear it to the park! I like to dress up as Snow White as much as the next girl, but you’ll have to save it for Halloween. Dressing up as a princess or other character is not allowed in the park for adults (according to Disney, anyone over the age of 10). Why? Disney does not want children to be confused about who the “real” Cinderella is in the park, nor do they want a child to see two versions of the same character simultaneously. This ruins the magic, and Disney goes to great lengths to ensure that this doesn’t happen. Plus, it could be a little bit creepy. There are 2 notable exceptions to this rule. If you attend a Mickey’s Not So Scary Halloween Party or participate in a RunDisney race, then you are free to wear your princess costume.

This little-known restriction came to my attention when I was visiting the Bibbidi Bobbidi Boutique with a friend and her daughter. For those who have not visited, it is a salon (located in Downtown Disney and Magic Kingdom) that does princess makeovers on children. You can even buy a dress or bring your own. I asked if they did adult princess makeovers, and the “Fairy Godmother” informed me that they do not, citing the costume restriction. I was just curious, really. I wouldn’t actually get a makeover. Honestly. So, the bottom line is, if you are over the age of 10, you’re going to have to skip the costume and settle for a pair of mouse ears.

Yes, Disney has a fair amount of rules about what you can’t do in the park. But let’s be honest, do you want to be grazed by a rollerblading guy in a speedo? Do you want your child approaching a stranger dressed as a princess for an autograph, or have to explain human anatomy to him or her because the guy or gal in line in front of you has a graphic tattoo exposed? Me neither. Disney wants us to all have a magical time, and the rules are pretty reasonable.

Of course, I’ll admit that I’d love nothing more than to dress up like Stitch and run through Tomorrowland, showing everyone how high my “badness level” is. Yes, I want to use the Utilidors to cut across the Magic Kingdom when the 3pm parade is blocking my path. But let’s face it- being asked to leave the park for any length of time is a fate that this Disney fanatic does not want to suffer!

I leave you with a poem to help you be a super rule-follower at Disney:

Keep your feet on the ground,

Be kind and wait in line.

Watch what you wear,

And don’t go sneaking around.

If your body is exposed,

Or your naughty tattoos show,

Cover up, do your best-

Just don’t cover it with a Cinderella dress.