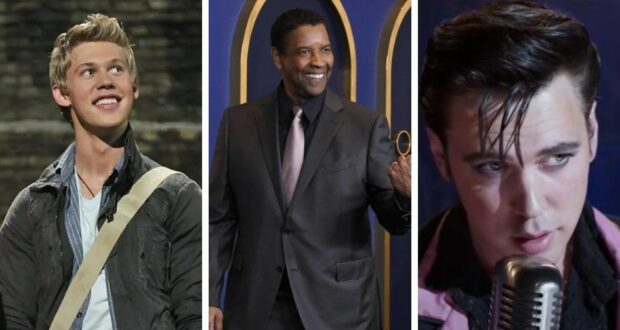 The new Elvis movie has many viewers talking (especially since it’s one of the trailers being shown before Doctor Strange in the Multiverse of Madness), and Disney fans will recognize the lead actor playing Elvis Presley from the Disney Channel show Hannah Montana, the Nickelodeon show iCarly, and the 2011 Disney Channel Original Movie (and High School Musical spin-off) Sharpay’s Fabulous Adventure.

Austin Butler might have left Disney behind some time ago, but the actor has apparently been making his way through Hollywood and Broadway — and leaving an impressive reputation in his wake!

Miles Teller, Ansel Elgort, and Harry Styles are three actors and performers who competed against Butler for the role of Elvis Presley in the “three-act pop-cultural opera”, but Elvis director Baz Luhrmann told Entertainment Weekly that Austin Butler had an ace in the hole: Denzel Washington.

Luhrmann was already impressed with Austin Butler’s rendition of the famous song “Unchained Melody”, but he also received a completely-unsolicited message from veteran actor Denzel Washington that brought extra attention to Butler.

Austin Butler had acted opposite Denzel Washington in the 2018 Broadway production of the Eugene O’Neill play “The Iceman Cometh” — and apparently the Sharpay’s Fabulous Adventure actor made a great impression on the Oscar winner! “I got a call from Denzel Washington, who gave me a cold call,” Baz Luhrmann told Entertainment Weekly. “I did not know Denzel. And he said, ‘I’ve just worked with this guy on stage. I’ve never seen a work ethic like it.’ And I’m like, ‘OK, I must see him.’” “His life fits beautifully into three acts,” Luhrmann told Entertainment Weekly as he described the new Elvis movie. “There’s Elvis the punk, if you like, the original punk rocker, the rebel. Then there’s Elvis the movie man, and that’s when he is pop and family-friendly. And then there’s ’70s Elvis, which is epic.” “Honestly, I put him through the ringer, but he lived Elvis,” Baz Luhrmann concluded, praising Butler’s performance opposite Tom Hanks (who plays Colonel Tom Parker). “What he’s managed to do is not do an impersonation, but to live Elvis, to the extent that he’s humanized him.”

Austin Butler also impressed the family members that the late Elvis Presley left behind, with Lisa Marie Presley predicting that the young actor will be receiving an Academy Award for his work in Elvis.

Elvis comes to theaters on June 24 2022! Have you seen the trailer yet (shown above)?