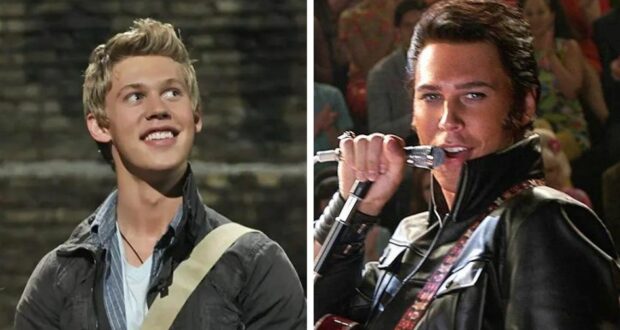 Austin Butler is known by many Disney fans for his Disney Channel roles, his Nickelodeon roles, and his long relationship with High School Musical actress Vanessa Hudgens. However, the actor is about to become known by a far wider audience after his new movie Elvis comes out, and Butler paid a heavy price for the “Oscar-worthy” performance that he gives! In a recent interview with GQ, the California-born actor (who became known for his days as a family-friendly heartthrob on Disney Channel shows like Hannah Montana and Nickelodeon shows like iCarly) revealed that he found it incredibly strenuous to play Elvis Presley — even though his acting skills garnered an unsolicited recommendation for the role from Denzel Washington and Elvis Presley’s family members have openly praised his performance in the Baz Luhrmann film (including Priscilla Presley and Lisa Marie Presley). “You can lose touch with who you actually are. And I definitely had that when I finished Elvis – not knowing who I was,” Butler told GQ. For an actor who is famous among other actors for being “unflaggingly upbeat”, playing a celebrity who goes through hardship like Elvis was mentally, emotionally, and physically challenging.

“My body just started shutting down the day after I finished Elvis,” Austin said. “The next day I woke up at four in the morning with excruciating pain, and I was rushed to hospital.” Butler had contracted a virus that apparently “simulates appendicitis” and had to spend the following week in bed recovering. Many actors have faced mental and physical challenges either during or after filming a particularly challenging role, so this is not unheard of.

Like Elvis, Butler (who is rumored to be dating model Kaia Gerber) has been described as “sensitive” and “spiritual”. Both men also lost their mothers at the same age, which only strengthened Butler’s connection to his role. Despite the challenges of playing the ‘King of Rock and Roll’ Elvis Presley, Butler maintains that “I’ve never loved somebody I’ve never met more than Elvis.” While playing Elvis Presley, Austin Butler immersed himself in all things “Elvis”. He had a coach named Polly Bennet who taught him specifically how to move like Elvis, and he drew inspiration for his mannerisms from wild animals like lions and alligators.

Even though the movie doesn’t come out until June 24, viewers who saw the trailer before Doctor Strange in the Multiverse of Madness in theaters have been recognizing that Butler’s performance will make the movie one worth seeing. Take a look at the trailer below if you missed it!