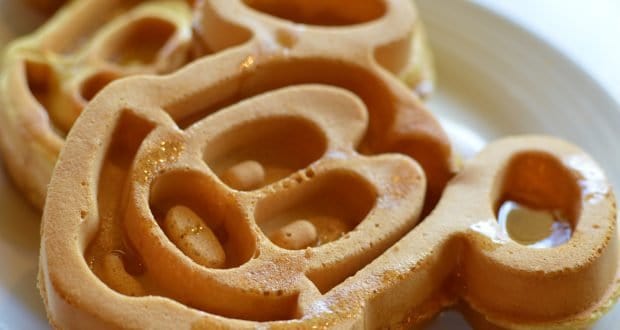 It’s a sad realization to think that Walt Disney World Resort and other Disney Parks across the globe have been shuttered for over a month now. While public health and safety considerations are very crucial matters and ought to be taken seriously, we cannot deny that a healthy dose of Disney can be very important in boosting moods and uplifting spirits in what remains to be for many the most challenging and trying times they’ve ever had to face. While Disney Parks remain temporarily closed, many fans and would-be visitors are growing antsy with anticipation for when they will be able to experience all the Disney Magic once again.

Even though some of the in-person exclusive experiences that can only happen onsite will have to wait a little while longer, there are other ways to make magic right at home. The pleasure of enjoying Disney food favorites, for example, is high on the list of must-dos for many vacationers, and fortunately the folks at Disney aren’t too hush-hush about sharing many of their famed food favorites with the public. So here’s a collaboration of delicious Disney treats you can easily make and enjoy right at home!

You can’t go wrong with this popular Disney staple, even if the general prep and ingredient incorporation is admittedly conventional by any waffle preparation methods. The major thing here is having a Mickey Mouse (or other Disney character-themed) waffle iron for the final shaping process. If you don’t have one you can easily order what you need online at shopDisney.com, or through plenty of other online retail vendor options. All the same, in getting down to the authentic taste you’ve come to know and love, we’ve got you covered with a step-by-step how-to that’s sure to make your concoctions come out in comparable format to those found in Parks and Resort locations, brought to you by picky-palate.com.

Beignets are all the rage in both Disney World and Disneyland alike. And while bountiful flavor options and seasonal selections create a wealth in variety for how to get your preferred beignet fixing, we’ve got the authentic, classic beignet recipe here for you to bake up right in your very own kitchen, provided by the official Disney Parks website. Note: This recipe yields 10 large Mickey Mouse-shaped beignets or two-dozen smaller beignets.

(Note: You will need a mixer and piping bag for this recipe along with a Mickey Mouse-shaped cutter if you opt for a Mickey shape.)

Disney Parks the world over are known for dishing out the same delicious churro recipe. A cult classic for many, these flavorful favorites boast a bountiful fan following and hold a unanimous seal of approval for being some of the very best of the best. Fortunately for us, the folks at Disney Parks have shared their recipe secrets for making these mouthwatering morsels right at home.

1 and 1/2 cups of vegetable or canola oil

(Note: You will need a piping bag.)

This Hawaiian highlight features an exclusive Disney-developed recipe that’s succeeded as a hit with devoted fans for well over three decades now. Popular at both Disney World and Disneyland, this refreshing chilled concoction is surprisingly easy to make at home in your own kitchen. And while there have been developments in uniquely new ways to dole out the Dole, including a delightful Pineapple Float option, we’re sharing the classic Dole Whip recipe Disney released for us.

(Note: You will need a blender.)

An alternate vegan version can be concocted with the following recipe, made possible by thedisneychef.com.

Water (if using a blender)

(Note: A blender or Yonanas machine will be needed.)

Have you tried the Grey Stuff? It’s delicious, according to Lumiere from Disney’s Beauty and the Beast. And anyone who has ever dined within the walls of the Be Our Guest Restaurant at Magic Kingdom Park would agree. Originally served as a special treat offered to select guests during times of special celebrations, popular demand has secured this tasty tantalization a spot on the restaurant’s regular dessert menu. Do note, however, that the recipe has been reimagined somewhat since it first premiered, altering it from its former panna cotta consistency to its current, more widely known cookies and cream mousse-like presentation. One thing that hasn’t changed though, is its state of deliciousness. And now you can try it yourself at home with this easy-to-follow recipe.

Edible pearls/sprinkles to decorate with, if you so desire

(Note: You will also need a food processor.)

This breakfast delicacy is a South Pacific pleasure you can only get at Disney’s Polynesian Village Resort. (Note: Tonga Toast versions served at Rain Forest Café in Disney’s Animal Kingdom and in Disney Springs are not the same!) Available at both Kona Café and Capt. Cook’s, the ways in which to dish up and garnish these offerings may differ depending on the premises location you opt for, but the same general recipe is used in the concocting nevertheless. And we have that recipe for you to make at home, made possible by Disneyfoodblog.com. This recipe serves four.

Want an ooey gooey chocolate chip cookie-tart that’s truly incredible? Then consider baking up some of Jack-Jack’s Num Num Cookies, inspired by Disney·Pixar’s The Incredibles franchise. While more popularly associated with Pixar Pier at Disney California Adventure Park in Disneyland, these mouthwatering morsels made their way over to Walt Disney World Resort last year during the Disney Parks worldwide summer celebration of superheroes—in conjunction with celebrating The Incredibles 2 and the grand opening of Pixar Place in Hollywood Studios. Ever since, Disney fans have been craving these savory sweet top-sellers at the Neighborhood Bakery. But the good news is Pixar has released their recipe for baking up batches of this super savory hit right at home.

(Note: You will need a mixer or whisk.)

If you’re looking for something more filling as well as Disney fulfilling, then consider recreating a bountiful breakfast feast like the one you know and love at Akershus Royal Banquet Hall in Epcot. While the profuse all-you-can-eat options and Disney Princess visits may be a little harder to recreate (unless you have young ones at home eager to don their best Disney Princess gowns for the breakfast occasion) we have an easy-to-follow copycat recipe for one of this restaurant’s favorite breakfast features—The Breakfast Potato Casserole.

While the sound of “strawberry soup” may send some scratching their heads in confusion, it definitely succeeds in garnering the attention of countless diners to the Grand Floridian’s 1900 Park Fare, curious to try some. And once you do, you’ll be happily hooked forever after. Served chilled, this restaurant specialty blends beautifully the natural sweetness and juiciness of fresh strawberries with cream in an all-out royal ensemble fit for the palate of any prince or princess. And because your home is your castle, we’re presenting this recipe for you to make in your own kitchen.

(Note: You will also need a blender.)

Disney’s Hollywood Studios is an echo of Hollywood, California’s bygone golden age in many ways. From retail to restaurants, no place rings truer to recreating the glamor and glitz of Hollywood’s heyday than the Brown Derby Restaurant. Fashioned after the original Hollywood Brown Derby on Vine Street, this venue boasts similar in comparison on all levels, including serving up one of the restaurant’s most famous house originals—Grapefruit Cake. Conceived from owner Robert Cobb’s suggestion to “put grapefruit into something” (a response to William Randolph Hearst’s complaint about desserts being too fattening), this unique and original confectionary concoction has been a one-of-a-kind hit ever since. And now you can make it for yourself right at home.

(Note: You will need a mixer.)

Some Disney classic recipes are legendary, as is the case with this last cult classic staple. Even better, it boasts one of the easiest preparations of all; really just one massive incorporation of well-loved ingredients, combined. It’s none other than the legendary Kitchen Sink sundae dessert you’ll find at Beaches and Cream at Disney’s Beach Club Resort. And thanks to the folks at Disney Parks, you can make your own Kitchen Sink Sundae in your own kitchen.

There are countless other Disney dishes you can make at home in addition to these highlighted hits. While admittedly some recipes require a lot more time and preparation, others are relatively simple to make. These can be found in various cookbooks as well as through several online resources. Just remember, however you you choose to dish out Disney, you’ll be making magic and memories right in your own kitchen, served up with a side of pixie dust.