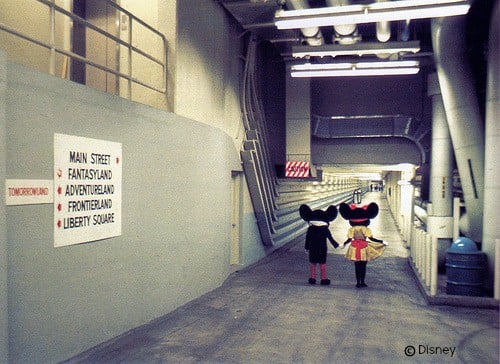 7. Behind the scenes tours and extras

There’s so much more to Disney Parks than what you see on the surface. And for some hardened Disney-haters, a chance to see beyond may be just the thing that prompts them to turn the corner from cynicism and enter onto a new path leading to underlying respect and appreciation for what makes Disney magic so magical. To dig deep into Disney secrets we recommend taking one of many behind-the-scenes touring extras that are available to sign up for. And for the Magic Kingdom, options span from lengthy nearly daylong opportunities to more condensed guided group outings that cover the basic wow factors. One of the best fully immersive tours to take at Magic Kingdom Park is the famed Keys to the Kingdom Tour, which spans five hours and covers every nook and cranny…literally, including Disney’s legendary underground facilities.

The Walt Disney: Marceline to Magic Kingdom Tour is another great suggestion, which encompasses a three-hour duration in which you will learn fascinating lesser-known facts and details about the man behind the mouse, his upbringing in Missouri, inspirations and participation in the 1964 World’s Fair, and other fascinating behind-the-scenes secrets at work in the Magic Kingdom. Other exciting tours, catered to specific interests, include Disney’s The Magic Behind Our Steam Trains Tour and Disney’s Family Magic Tour—a unique scavenger hunting experience that takes you throughout the park. If you liked the aforementioned point on making an experience out of finding hidden placements then this tour may just what you’re looking for. Other beyond the surface extras to consider include the Ultimate Day of Thrills VIP Tour, the Ultimate Disney Classics VIP Tour, and Disney After Hours at Magic Kingdom Park.

It isn’t often that you expect to find scrumptious quality dining within the limits of any theme park. But as we have by now established, Disney World isn’t just any theme park. So it may come as a surprise to the inexperienced visitor that Disney’s in-park dining options go above and beyond those typical carnival snacks and sometimes poorer-quality junk food options that are far too often the norm in such environments. Sure you can still get all those joyful guilty pleasures if that is really what you’re hankering for, but keep in mind that these aren’t the exclusive offerings for food you will find here.

All of Disney’s four parks, resorts, and Disney Springs boast a bountiful host of enticing, decadent table service restaurants and eateries. Many are even award-winning dining destinations with notable reputations, masterful chefs, stellar kitchen staff, and a commitment to using the freshest wholesome ingredients. The Magic Kingdom alone is home to several unique restaurants worth mentioning. Cinderella’s Royal Table, for example, is perhaps one of the park’s most popular picks. Open for breakfast, lunch, and dinner daily, this experience includes both signature dining and character dining in one, with Disney’s favorite princesses onsite to meet and mingle with guests.

Other renowned restaurant favorites include bountiful family-style dining to put you in mind of Thanksgiving at Liberty Tree Tavern, a lavish buffet with Winnie the Pooh and other friends from Hundred Acre Wood at Crystal Palace, casual Italian-style dining inspired by Disney’s Lady and the Trampat Tony’s Town Square Restaurant, and humorous puns and platters that come with a side of witticism at the Disney’s Jungle Cruise-themed newer sit-down restaurant, Jungle Navigation Co. LTD Skipper Canteen. But for many, it’s the Beauty and the Beast-inspired Be Our Guest Restaurant over in Fantasyland that is currently the Magic Kingdom’s arguably most unique newer must-experience dining endeavor.

While breakfast and lunch are considered casual quick service, and only dinner is deemed a signature upscale dining experience, there is nothing standard or casual about either breakfast or lunch—from the stunning décor, multiple dining rooms, and magic that comes when your enchanted entrées find their way to your table. All in all, dining at Disney World is always a premium experience, whether you choose a quick and casual option or a more refined table service designation. What’s more, Disney is committed to taking care of all your needs, including allergies and other dietary specificities. So if you happen to be a diehard foodie but not necessarily a fan of Walt Disney World Resort, just experience the dining for yourself. We guarantee you’ll be won over.

Perhaps the simplest, yet in many ways, most meaningful experience sure to thaw the ice in any hardened Disney-hating demeanor is good old kindness. Disney employees, more commonly referred to as “cast members,” are not your usual theme park/resort workers that go around with tired, sullen looks and an unapproachable moody disposition. These people have been hired specifically to work at the Happiest Place on Earth for a reason—to emanate the happiness, helpfulness, and ever-pleasant vibes Walt Disney himself built his dream around.

While people are people everywhere you go, there is something truly remarkable about the warm friendliness and approachability of Disney cast members. You never have to feel nervous or degraded when asking anything of them, from something was simple as inquiring where something is located to getting advice on how to do something. Their kindness and commitment is commendable, especially when compared to other employees at different theme parks.

Disney cast members, on a whole, are among those who truly demonstrate hospitality. So a cynical Disney-hating visitor stepping into Magic Kingdom Park for the first time would have a difficult time keeping a hardened face in response to the cheerful greeting smiles, the friendly hellos, and sincere questions on how someone may help them. It’s a way to stop them dead in their tracks, giving new meaning to the concept of “killing with kindness.” After experiencing such lethal doses of positivity, even the most hardened Disney-hater will lose their rough-around-the-edges veneer.

Disney magic has the potency to convert anyone willing to take the chance to experience the Magic Kingdom for themselves. And as we said before, there are plenty of other undertakings within Disney’s other parks, resorts, and affiliated local destinations as well. With all that a visit to Walt Disney World Resort on a whole can offer, we assure you that you will succeed in your quest to change any Disney cynic into a fellow Disney fanatic.