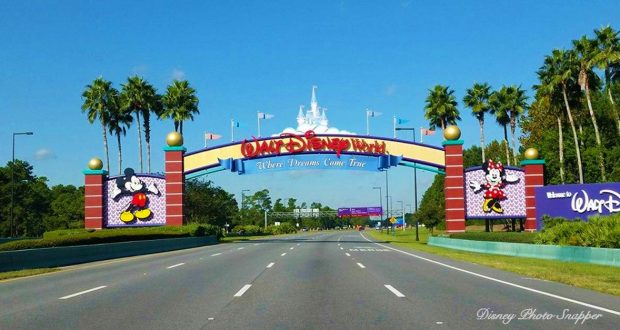 From our friends at DisneyLists.com

A major accident just after 2 pm on World Drive has brought down an over the road sign structure and closed the primary road in and out of Disney World (Pictures below).

The accident involved two cars headed north toward Magic Kingdom. The cars crossed the median and struck the sign structure bringing it crashing down into south-bound traffic. An SUV actually struck the pole and is extensively damaged. Amazingly, no vehicles headed south stuck the sign as it was falling.

This happened as we were driving through the area though we were not involved. Emergency vehicles including fire trucks and ambulances arrived quickly. We witnessed the driver of the black SUV being removed from the vehicle by emergency personnel. The driver body and neck were immobilized. We have not seen any other occupants removed at this time.

Currently, north-bound lanes headed toward Magic Kingdom are open although left lanes are closed and causing a back up. South bound lanes are completely blocked and closed. Access to south-bound world drive is now restricted, although those stuck behind the sign have not yet been moved or rerouted.

More details as they are available.