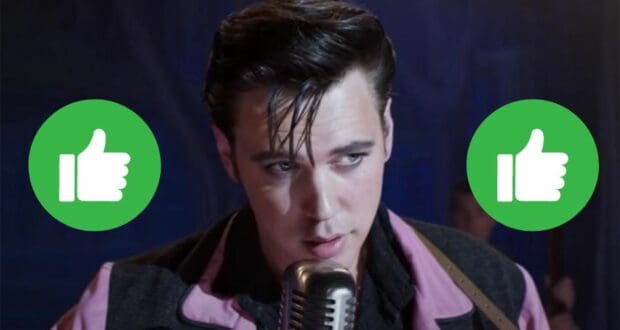 Most movies that are not action-packed blockbusters like this summer’s mainstays (i.e. Jurassic World: Dominion, Doctor Strange in the Multiverse of Madness, Top Gun: Maverick, and Thor: Love and Thunder) will patiently sit on the sidelines and have their heyday once people start watching them at home on streaming platforms like Disney+ or Hulu. Emotional biopics or dramas don’t lend themselves well to the big screen, usually, and audiences would rather see big cinematic fight scenes for the price of a theater ticket! The new movie Elvis, however, seems to have changed that.

The Warner Bros. biopic Elvis actually beat the box-office smash hit Top Gun: Maverick during its opening weekend — and since Top Gun: Maverick had beaten both a Pirates of the Caribbean record and a Marvel record, that was no small feat. However, many viewers who have now seen the movie will agree that it deserves the hype. Tom Hanks plays Colonel Tom Parker, Elvis Presley’s controlling manager, and Disney Channel alum Austin Butler plays the King of Rock and Roll Elvis Presley. The biopic focuses on three stages of Elvis Presley’s life: his time before fame, the highs and lows of his heyday, and the iconic singer’s tragic descent that coincided with his last Vegas shows. Expectations were high for the film, both since Denzel Washington had personally recommended the Sharpay’s Fabulous Adventure heartthrob for the role after working with him on stage and since Austin Butler apparently committed to the role so viciously that he was hospitalized just after filming.

Such a high level of commitment paid off, despite Butler’s personal struggle with shaking off the role after immersing himself in all things Elvis Presley for months: the Baz Luhrmann movie is a triumph.

Austin Butler might have just taken jobs as a standard Disney Channel love interest on shows like Hannah Montana and Nickelodeon shows like iCarly for the paychecks back in the day, and the actor made it clear that he had been dreaming of more in-depth emotional roles back then even as he became more successful through his Disney work, but Butler’s endearing boy-next-door charm still comes through occasionally while he’s playing Elvis (which makes the story even more tragic somehow). It was a simple video of Austin Butler singing “Unchained Melody” that first drew director Baz Luhrmann’s attention to the actor, and it is apparent from watching Elvis that the young actor truly is a talented singer. His voice is beautiful, and his physicality while portraying Elvis Presley on stage during performances is just sublime.

Tom Hanks does well as Colonel Tom Parker, although the actor is so recognizable that viewers might be hard-pressed to truly forget the actor behind the prosthetics. Austin Butler, on the other hand, delivers a heart-wrenchingly beautiful, poignant, and bittersweet performance as Elvis Presley that will not only last in viewers’ minds, but will also most likely make many Disney fans look back in shock as they try to reconcile his Oscar-worthy performance with his squeaky-clean, two-dimensional Disney roles.