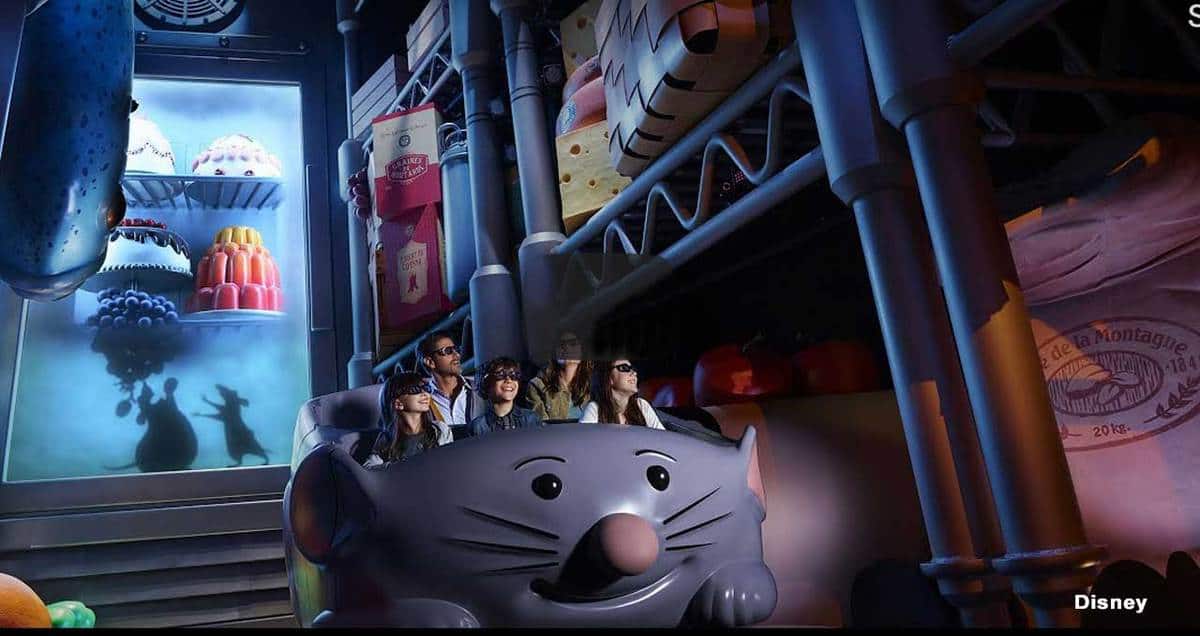 While we are on the topic of developments within Epcot’s France Pavilion, it seems only fitting to discuss another project in the works—an all-new 4D experience themed after Disney’s Ratatouille. Called “Remy’s Ratatouille Adventure,” this trackless coaster-like dark ride is being modeled after the famed Disneyland Paris version, which currently ranks as that park’s number one attraction. For this experience, guests will shrink down to the size of Remy and join him on the ultimate adventure race through the kitchen and Gusteau’s restaurant, all while experiencing simulated virtual effects along the way. Construction for Remy’s Ratatouille Adventure is currently underway and will be located in a new area of the France Pavilion past the Eiffel Tower. While no official opening date has been declared (aside from the fact that this attraction is slated to be up and running prior to Walt Disney World’s 50th anniversary) some sources mark it for October 2021 while others suggest an opening as early as May 2020.=

As part of the Hollywood Studios 30-year anniversary celebration as a Disney Park, guests are already experiencing a whole host of new attractions in the works. From the debut of an Incredibles-themed Municiberg city block party to last throughout the summer to meet and greets with Mike and Sulley from the Disney•Pixar Monsters, Inc.movies, and let’s not forget the recent opening of Lightning McQueen’s Racing Academy, Disney’s Hollywood Studios is definitely progressing in its offerings and attractions. One such experience that just recently premiered this month was an all-new nighttime show—Wonderful World of Animation.

This new spectacular utilizes high-tech state-of-the-art projection effects in an elaborate collaboration designed to take viewers on a magical journey spanning more than 90 years of Disney and Pixar animation. The show is projected onto none other than the Chinese Theatre, transforming it into a timeless tribute to animation, featuring moments from memorable films old and new alike. And as it’s only fitting to acknowledge the fact that it all began with a mouse, Mickey Mouse himself is a very crucial part of the show’s finale.

It’s a strange but true fact that up until this point there haven’t been any rides in Walt Disney World that are actually themed after Mickey Mouse himself. But that’s all about to change with the opening of Mickey & Minnie’s Runaway Railway over at Hollywood Studios. This new dark ride experience will feature an original storyline and all-new musical theme, taking riders into the wacky world of Mickey Mouse shorts, for which the attraction was inspired.

Guests are in for a whole host of unpredictable antics, from twists and turns to stunning visual effects and screen transformations that incorporate game-changing innovations in the real world/animation divide. While the opening date for Mickey & Minnie’s Runaway Rail was originally slated for fall 2019, recent updates now indicate that it’s not set to open until early spring of 2020. But given all that this new attraction will entail, it will definitely be worth the wait.

While hotels aren’t typically thought of as “attractions” per se, Disney hotels are indeed head and shoulders above the rest with their stellar amenities and impeccable quality standards. And given that one of their three newly planned hotels does in fact offer an “all-immersive” Star Wars-themed experience in itself, we consider news on all upcoming hotel updates worth mentioning here.

Let’s begin with the aforementioned new Star Wars-themed resort, which we already know is being conceptualized as a vacationing experience for guests beyond the parks. While all Disney properties are known for spreading magic beyond its parks via uniquely themed resort stays, rumor has it that there is something truly revolutionary and one-of-a-kind about the all-inclusive experiences this hotel will offer. Another hotel with a planned opening for as early as this December is the Disney Riviera Resort. Continued next slide...