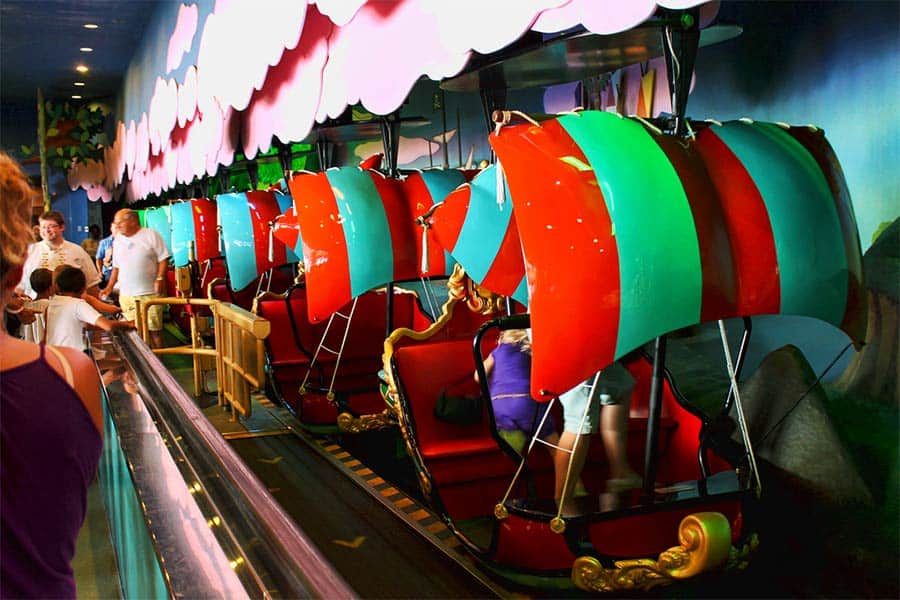 Hop aboard a galleon and set sail over the city of London on your way to Never Land in this ride that is a perennial fan favorite.  Peter Pan’s Flight takes you on an adventure to join Peter, Wendy, John, and Michael as they fly to the second star on the right and straight on ‘til morning.  Along the way you’ll see the Lost Boys, mermaids, and the infamous Captain Hook and Mr. Smee.  Only a codfish wouldn’t like this ride!

Buzz Lightyear’s Space Ranger Spin is an exciting shooting gallery game that you ride.  Pilot your space cruiser into the Gamma Quadrant and use your laser cannon to blast Zurg and his squadron of robotic henchmen.  Be sure to fire accurately and accumulate as many points as you can!  Do you have what it takes to be a Galactic Hero?

Walt Disney certainly must have loved a good pun, because there are so many attractions at Magic Kingdom that make generous use of them.  The popular Jungle Cruise is no exception, thanks to its delightfully droll skippers who take great pleasure in your mirthful groans.  Check out the “exotic” wildlife and watch out for headhunters!

It might be called Mickey’s PhilharMagic, but it’s Donald Duck who gets into trouble when he decides to put on Mickey’s sorcerer’s hat and conduct an orchestra.  Things go haywire pretty quickly, and we join Donald as he is transported into several classic Disney songs.  This 3D fantasy is a spectacular adventure not to be missed!

When you’re stuck on a runaway mine train, all you can do is hold on tight and hope for the best!  Big Thunder Mountain Railroad takes guests racing down a rickety track and into an abandoned mine shaft.  A great ride with plenty of quick turns and drops, your train will zip in and out of caverns and through an abandoned gold-mining town as it speeds along out of control.  You’ll love the “wildest ride in the wilderness”!