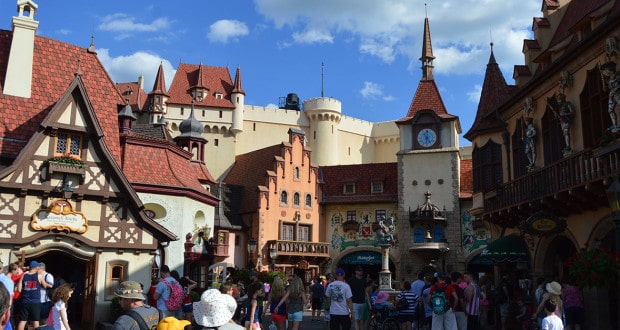 Every year, millions of people from around the world visit the Walt Disney World Resort in Florida. It is the most popular vacation destination in the world. What is it about Disney World that motivates people to spend thousands of dollars and travel great distances to take their family to this central Florida theme park mecca? Why, it’s the Disney magic, of course! If you are planning a trip to Walt Disney World, here are 10 experiences you just can’t live without!

1) Meeting Mickey Mouse – For many, especially those traveling with children, a trip to Disney can’t even start without first meeting the Big Cheese himself, Mickey Mouse! Opportunities to meet Mickey (and other Disney characters) abound. Mickey can be found at all four Disney parks. For a real genuine experience, meet Master Magician Mickey Mouse in the Town Square Theater in the Magic Kingdom. The entrance is just inside the Magic Kingdom, to the right, next to Tony’s Town Square Restaurant. A Disney Photopass photographer will be there to record this special moment. You can also meet Mickey at The Character Spot in Epcot, The Adventurers Outpost in Disney’s Animal Kingdom Park and at the Magic of Disney Animation at Hollywood Studios.

2) Watching a Disney Parade – Everyone loves a parade, right? The Disney parades at the Magic Kingdom aren’t just an assembly of moving floats and characters. Each is a well-planned and rehearsed theatrical production, perfect in every detail from the methods of transportation, to costumes and music. You might wonder, is it worth my time away from the rides and attractions to see the parades, especially if you’re an adult without children? I say, yes! Don’t miss the unparalleled opportunity to see Disney Imagineering come to life before your eyes. These could very well be the highlight of your trip! The Magic Kingdom offers to two daily parades, The Festival of Fantasy Parade at 3pm and The Main Street Electrical Parade, after dark, sometimes twice per evening.

3) Strolling along World Showcase – Epcot, Disney World’s second theme park, is quite large and will require a lot of walking. The good news is, Epcot handles crowds well. Epcot is divided into two sections, Future World in the front and World Showcase in the back, separated by World Showcase Lagoon. While a Disney vacation can sometimes be hectic and tiring, a great way to relax and “live in the moment” is to take a stroll around World Showcase. Eleven different countries are represented, from Mexico to Japan to Canada. Each pavilion is staffed by cast members who are native to the country represented. You can find numerous shopping and dining venues throughout each country. Take time to talk with the friendly cast members from Germany or China. Enjoy a relaxing meal under the stars in Mexico. See a beautiful travelogue in France. See a belly dancer in Morocco. Oh my! *Bonus tip: To experience World Showcase fully, plan a minimum of one day.

4) Having your picture taken in front of a park icon – Each of the four Disney parks has an icon, a symbol of that park. Walt Disney called it a “wienie”, something to draw the guests into the park, even from a distance. Seeing Cinderella Castle in the Magic Kingdom, Spaceship Earth in Epcot, the Tree of Life in Animal Kingdom and the Tower of Terror Hotel in Hollywood Studios up close is breathtaking, to say the least. A great way to create a lasting memory is to have your family’s picture taken in front of these icons. Disney’s Photopass photographers will be glad to take your picture for you.

5) Doing a character meal – The Disney characters are all over the parks, almost at every turn. In most cases, meeting a character requires you to queue up, like you would at an attraction. Depending on the popularity of the character, your wait can be significant. For convenience sake, consider a character meal. Hey, you gotta eat, right? Character meals are offered at all four theme parks and many of the resort hotels. Wanna have breakfast with Mickey and Donald? Try Chef Mickey’s at the Contemporary hotel. How about lunch with Pooh and friends at Crystal Palace? Or the most special of all, dine with your favorite princesses in Cinderella Castle!

6) Riding the monorail – When Walt Disney began to plan his “Florida Project”, he gave considerable thought to transportation. Like he had at Disneyland, Walt wanted some sort of monorail to transport guests around- a “highway in the sky”. At Disney World, there are 3 monorail “loops” that function not only as transportation options, but are also just fun to ride! Guests arriving at the Transportation and Ticket Center can take the express loop directly to the Magic Kingdom. A special bonus is riding directly through the center of the Contemporary Hotel! Guests staying at the Magic Kingdom area hotels can take the hotel loop to any of their neighboring hotels or the Magic Kingdom. Arguably, the most thrilling loop is the trip from the Transportation and Ticket Center to Epcot, which actually travels inside Epcot, before stopping to let you off.

7) Riding a boat – Walt Disney World property is the size of a large city and is dotted with lakes and other waterways. Boat transportation is a viable option for getting to many places around Disney. Day guests headed to the Magic Kingdom can take the boat across Bay Lake and watch as they approach Cinderella Castle. At Epcot, you can ride one of the Friendship boats across World Showcase Lagoon and even over to Hollywood Studios. If you’re looking to “get way” from the hustle and bustle of the parks, take the boat from the Magic Kingdom to Disney’s Fort Wilderness. You will literally feel as if you’ve left the world behind! Guests staying at Port Orleans, Old Key West or Saratoga Springs can take boat transportation to Downtown Disney, where shopping, dining and entertainment options abound.

8) Seeing the Disney fireworks – Did you know Disney sets off more fireworks than anywhere else in the world? Every night is New Year’s Eve and the 4th of July combined! You do NOT want to miss the Disney nighttime spectaculars. At Magic Kingdom, even tough guys get “weepy” as Jiminy Cricket narrates Wishes. At Epcot, Illuminations will blow your mind as you experience stunning lights, a spinning Earth globe, and a spectacular musical score. At the Disney Studios, Mickey Mouse battles the Disney villains in Fantasmic!

9) Staying at a Disney resort hotel – If you want the full, immersive Disney experience, consider staying at one of the Disney resort hotels. While you might pay more, the Disney magic will surround you 24/7. Every Disney hotel is well-themed, down to the smallest detail. The greatest benefit might be the exceptional customer service that Disney is known for. *Bonus tip: You can arrange for Mickey or Minnie to wake you up each morning!

10) Rope Drop – For many, a vacation involves sleeping in each morning. Not having to set an alarm clock is a nice way to drift off to sleep at night. Nevertheless, you should consider getting up early and getting to the parks before everyone else. Not only will you get to see a great opening show, but the attraction wait times will be practically nothing for the first hour or two. There’s nothing like walking on Space Mountain or Soarin’ or Expedition Everest. Hey, you can sleep when you get home!