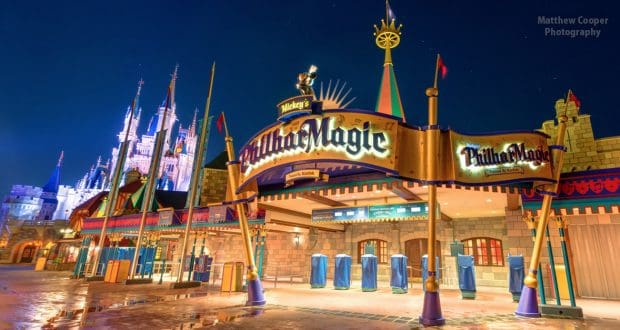 Ever wanted to fly on a magic carpet with Aladdin and Jasmine, or smell the delicious food Lumiere presented to Belle in Beauty and the Beast? Maybe you want to party hard during “I Just Can’t Wait to Be King” with Simba. If you want to do all that with Donald Duck, then I have the ride for you. Alright, I lied, it’s not a ride, it’s a 4-D attraction called Mickey’s PhilharMagic, located in Fantasyland at Magic Kingdom. I’ve dug through the history of this building, and I am here to give you the funky fresh facts about my favorite ride…err movie…uhh attraction…Mickey’s PhilharMagic.

Mickey’s PhilharMagic opened in 2003 in Fantasyland and is about twelve minutes long. It features Donald Duck traveling through some of Disney’s greatest musical numbers: “A Whole New World”, “Sorcerer’s Apprentice”, “You Can Fly”, “I Just Can’t Wait to Be King”, “Part of Your World”, and “Be Our Guest”. But it’s not just traveling; guests are immersed in these worlds. They smell the apple pie offered by Lumiere, and feel the wind brush past them as they fly through London, and get a splash as they enter down under the sea to see Ariel.

It has one of the shortest wait times in Fantasyland due to the attraction’s large capacity so this is a perfect spot when guests start to feel a bit claustrophobic and need some A/C. The 3-D effects are nothing frightening and are easy for small children to handle.

There are two other PhilharMagic attractions as well; one at Hong Kong Disneyland and the other at Tokyo Disneyland, both featuring my favorite duck.

At 150 feet, it is the largest purposely built 3-D movie screen, but the 3-D effects are focused in the center of the screen. Imagineers found that having the whole screen in 3-D causes guests to get nauseous, but since action happens in the middle of the screen anyways, guests won’t be aware. Don’t worry, it doesn’t matter where you sit in that massive theater, you’ll be able to see the eye-popping visuals.

The director of the attraction, George Scribner, also directed The Prince and the Pauper and Oliver & Company. Alex Mann, who was the story artist for Tinker Bell and Treasure Planet, also had a hand in writing the script.

Most of Donald Duck’s lines are from the original voice actor, Clarence Nash. Disney went to the archives and pulled old recordings of the duck. Only five lines were recorded for the attraction by the current voice actor, Tony Anselmo.

It is one of the rare times that the Imagineers collaborated with another aspect of the Walt Disney Company. This time, it’s the Walt Disney Featured Animation. Guests have seen this collaboration before in a little show called Fantasmic over at Hollywood Studios and Disneyland.

The whole attraction took three years to make, and in that time, they brought in a lot of talent and some of the original animators to help convert loveable 2-D characters into 3-D. Glen Keane, the supervisor animator for many classic Disney characters, such as Aladdin and Beast brought Ariel popping to the audiences. Nik Ranieri, the supervisor animator for Lumiere, came aboard to bring the candelabra to life as well.

It was Glen Keane’s first time working with CGI animation, and he enjoyed it so much, he took that energy forward and became the executive producer and animation supervisor for Tangled.

The building itself has existed since the park opened in 1971 but was home to the Mickey Mouse Revue, which featured small vignettes of animatronics singing various Disney songs (sound familiar?). After that, Magic Journeys moved into the space in 1987 then changed again to the Legend of the Lion King in 1993, which was used as inspiration for the Broadway version.

It’s important to note that when this attraction was in the planning stages, Pixar had already released Toy Story and A Bug’s Life, ushering in a new chapter in animation history. Disney Animation Studio’s only attempt at a completely CGI movie was Dinosaur from 2000 (it did not do well in the box office, although well enough to get its own ride, but that’s a different article). So PhilharMagic was Disney’s first successful CGI short and gave the Disney company encouragement and tools to move in that direction. One could even argue that without this attraction, we wouldn’t have films like Tangled or Frozen. Regardless of its place in Disney history, this attraction is fun for the whole family, harkening back to the old Disney shorts but looking forward to the future with innovation and humor.