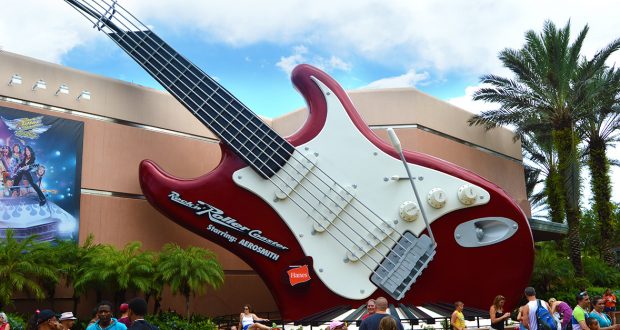 10 Must Do Attractions At Disney’s Hollywood Studios

10. The Great Movie Ride: The Great Movie Ride is located in an iconic replica of the world famous Chinese Theatre in Hollywood, California. The line for this rides takes you inside the theatre and through a small museum or movie props. This ride takes you and guests in a guided vehicle throughout the history of motion pictures and recreates scenes from twelve classic films. Some of the films include ‘The Wizard of Oz’, ‘Casablanca’, ‘Alien’, ‘Mary Poppins’ and more! The ride features the classic Disney animatronics, as well as, live actors. It’s a great experience through movie history and is sure to leave you with a smile on your face.

9. Fantasmic!: Fantasmic is one of the most exciting nighttime shows available at Walt Disney World. This show is larger than life and is perform at Disney’s Hollywood Studios. Fantasmic takes guests into dreams of Mickey Mouse and an epic battle with some of the wicked Disney villains. There are three “mist screens” that are used throughout the show. They help the story of Mickey fighting the villains of Disney come to life. There are 3 mist screens that give each section of the theater seating a great view. Classic clips from movies like, ‘The Little Mermaid’, ‘Fantasia’ and more appear on the screens throughout Fantasmic. Fantasmic is a twenty-six minute show that is performed almost every night at Hollywood Studios, sometimes even twice a night. You will want to check the schedule before you go. This show is the best way to end your day at Disney’s Hollywood Studios. Make sure you line up early; even though the theatre can hold over 6,000 people this show fills up quickly!

8. Muppet Vision 4D: This classic attraction was directed by the late Jim Henson and features all of your Muppet favorites, including Kermit the frog, Miss Piggy, Sam the Eagle and more. This film takes you into the Muppet theatre. You will wear 3-D glasses to experience this fun filled, humorous movie. There are animatronics that will interact with guests too, including Statler and Waldorf heckling everyone in the balcony. This movie is fun and is a great way to escape the heat and relax in some air conditioning. This heartfelt attraction is a must do when visiting Hollywood Studios.

7. Indiana Jones Epic Stunt Spectacular: Indiana Jones is one of my personal favorites. You experience Indy has he runs away from the famous giant boulder and fights off bad guys with Marion in tow. You’ll feel like you are watching Raiders of the Lost Arc live! They also pick guests from the audience to participate in the show live on stage. This show is filled with fire, explosions, daring stunts and humor as well. Make sure you line up early, as this amphitheater can fill up quicly!

6. Rock N’ Roller Coaster Starring Aerosmith: Rock ‘n’ Roller Coaster featuring Aerosmith: Rock ‘n’ Roller Coaster is also located in Disney’s Hollywood Studios. This ride features Aerosmith in the pre-show and during the roller coaster itself. You will ride in a car heading to a concert at top speeds. This thrilling ride starts off with bang; your car will accelerate from 0 to 60 miles per hour in just over 2 seconds. This is the second fastest attraction at all of Walt Disney World. There are loops in this ride and you will go upside down. The first inversion will let you experience 3.5 G’s, which is more than an astronaut would experience during a space shuttle launch! The roller coaster takes place in a dark environment and will have Aerosmith’s rock ‘n’ roll blasting in your ears as you ride. Rock ‘n’ Roller Coaster featuring Aerosmith is a very popular attraction, so make sure you get a FastPass before you ride!

5. For the First Time in Forever: A Frozen Sing-Along Celebration: The Frozen Sing-Along Celebration took the place of the American Idol theatre at Hollywood Studios. This fun, interactive experience will take you and your friends and family straight into the land of Arendale. Sing at the top of your lungs to all your favorites from Frozen. Queen Elsa and Princess Anna will come out and sing with everyone, among some other surprises. This fun attraction is a must do at Disney’s Hollywood Studios.

4. Star Wars Launch Bay: The Launch Bay is a relatively new attraction at Hollywood Studios. You can start this attraction by watching a ten minute video on the behind the scenes of the Star Wars film franchise. Inside the Launch Bay you can meet Chewbacca and Kylo Ren. They are great character meets, as the characters are in private rooms and you and your friends and family will have a great private meet and greet. Wondering throughout the Launch Bay you can find Jawas, Greedo and other characters throughout the day. There are also several galleries that have props from all of the Star Wars movies, and a game room for children and the young at heart.

3. Star Tours: Star Tours is a Star Wars themed simulation ride where you get to experience the jump to hyperspace and the different planets of the Star Wars galaxy, all in 3-D! This attraction is fun for all ages. You wear 3-D glasses as you travel with C3-PO and encounter many other Star Wars favorites along the way. This ride changes every time you ride it, you never know which planet you will land on and what creatures you will encounter. This is a must do for Star Wars fans and a must do for Hollywood Studios.

2. Toy Story Midway Mania: This might be the most popular ride at Hollywood Studios. Toy Story Midway Mania takes you into Andy’s room as you prepare to board vehicles with a partner. You and your partner will travel through a 3-D arcade and try to win as many points as you can. This interactive ride is a blast. We definitely recommend a Fast Pass for this ride; the wait is often super long, even after the park first opens. This is a must do, but get that Fast Pass to avoid a long line!

1. The Twilight Zone Tower or Terror: The Twilight Zone Tower of Terror is located at Disney’s Hollywood Studios. This is a dark ride where enter a fictional Hollywood Tower Hotel and is closed and dusty. The introduction is themed after the famous Twilight Zone series. The premise of this ride is that the hotel elevators have been under the influence of supernatural activity for many years. You will be taken into the basement and board a service elevator. The elevator takes you on a ride where you are rocketed into the air and then dropped back down. This ride will be different every time you ride it, which makes it extra thrilling. The Tower of Terror is the second largest building at Walt Disney World and stands 199 feet tall. This ride will give you the feeling of weightlessness as you rocket up and then are pulled back down. The motors that control the elevators during the ride generate torque that is equal to that of over 200 Corvette engines and reaches top speed in just over one second! The Twilight Zone Tower of Terror is a great experience for thrill seekers and a must do at Hollywood Studios.