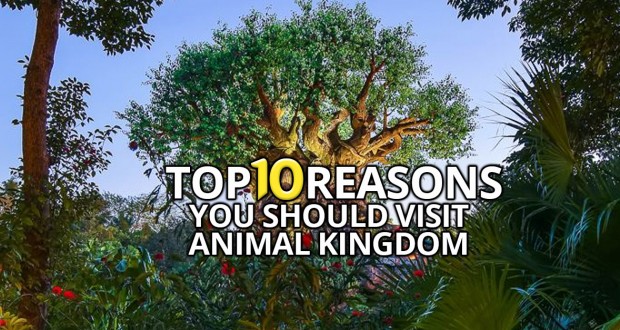 Walt Disney was always fond of animals and wanted to involve live animals in his theme parks. It wasn’t until 32 years after his passing that his dream finally came to fruition, with Disney World’s fourth theme park, the Animal Kingdom. Often overlooked by central Florida guests, here are 10 reasons you should visit Disney’s Animal Kingdom on your next visit to Disney World.

1. Kilimanjaro Safaris – It’s not a zoo; it’s a theme park with live animals! When the Animal Kingdom opened in 1998, Disney had to overcome public perception that it was just another zoo. To do that, they “plussed” the experience, beginning with their headliner attraction, Kilimanjaro Safaris. Once you arrive in Harambe Reserve in the Africa section of the park, you board an over-sized jeep and set out for a 20-minute adventure on an African safari, at least Disney’s version. Your driver will point out animals such as zebras, wildebeests, impalas, Thomson’s gazelles, giraffes, and even lions. Tip: Even though the ride is a bit bumpy, have your camera ready! You should be able to get several good shots, many close up.

2. The Oasis – Just like Main Street USA in the Magic Kingdom, the Oasis functions as a “gateway” to the rest of Animal Kingdom. Lush, tropical plants, trees and flowers line several paths to the center of the park. Tip: Don’t rush through this area! At least two dozen types of small animals live here.

3. Attention to detail – Disney went to great lengths to make the Animal Kingdom “lands” as realistic as possible. From the village of Harambe in Africa to Asia’s mythical Kingdom of Anandapur (place of delight), complete with crumbling ruins of an ancient village, the attention to detail is stunning!

4. Thrill rides – Even though the Animal Kingdom is based on live animals, the Disney Imagineers didn’t forget about you thrill ride junkies! From Expedition Everest (a thrilling roller coaster ride to find the hidden yeti in the Himalayan mountains) to Dinosaur (a journey back in time to the days when dinosaurs roamed the earth) to Kali River Rapids (a thrilling boat ride through the Chakranadi River), Animal Kingdom park will satisfy every thrill seeker!

5. Cast members – Disney refers to their employees as “Cast Members”. At the Animal Kingdom, these cast members take on a special role. Many are from the continents of Africa and Asia and they enjoy talking about their homeland. Don’t be afraid to stop and engage them in conversation about their native land. Check out their name tag to see where they’re from. Also, many of the cast members are animal experts. As you walk along the Pangani Forest Exploration Trail in Africa or the Maharajah Jungle Trek in Asia, stop and talk to the cast members about the animals you are viewing.

6. Music – All over Walt Disney World, if you pay attention, you will hear background music. At Animal Kingdom, you’ll want to be sure to check out the live music around the park. In Harambe Village, you can hear groups such as Burudika (Swahili for “to be refreshed”), who play Afro-pop music. In Asia, DJ Anaan invites you to learn fun Indian-based dance moves. Tip: In Africa, your kids can play along on many different types and sizes of African drums.

7. Shows – Disney excels at live entertainment. At Animal Kingdom, you’ll want to be sure to check out Festival of the Lion King and Finding Nemo-the Musical. Both shows are Broadway-caliber performances and fun for the whole family. Tip: Enjoy these shows during the heat of the day, if possible. A seat in air-conditioned comfort will be refreshing.

8. Tree of Life – All the Disney parks have an icon, something that draws you into the park. At Animal Kingdom, it’s the majestic Tree of Life, a technological marvel! Your jaw will drop at the sight of this massive structure! Housed underneath this “tree” is the hilarious 3D spoof, “It’s Tough to be a Bug!” This fun show gives merit to our smallest of friends, the insect world. Where would we be without them? Tip: As you are in line for the show, check out the beautiful animal carvings in the trunk of the Tree of Life.

9. Rafiki’s Planet Watch – Edutainment, or, education while being entertained. Take a ride over to Rafiki’s Planet Watch on the Wildlife Express Train. This “land” is made up of several areas which are focused on the environment, conservation and animal well-being. If you time it right, you might even see veterinarians treating one of the animals. Tip: Take your little ones to the Affection Section, where they can pet some of the smaller animals.

10. The Boneyard – This is an interactive playground for children, located in DinoLand USA. Allow your kids to play in this fun “Dig Site”, while you sit in the shade with a cold drink. Tip: This area can get hot in the summer, so visit early or late in the day.