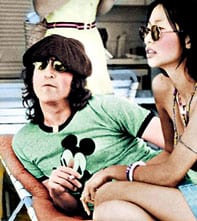 5. Disney World and the Beatles:

John Lennon signed the official documents dissolving the Beatles on December 29, 1974, while vacationing at the Polynesian Resort at Disney World. The Beatles and their band of many lawyers had previously met at the Plaza Hotel in New York City to sign the documents, but John Lennon failed to show up. When they asked him why, he simply said that he could not sign at that time because “the stars aren’t right.” They were apparently much better aligned over the skies of Cinderella’s Castle just a short time later.