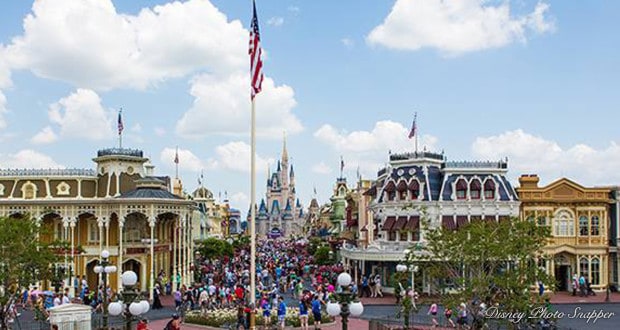 Walt Disney World will be celebrating its 45th anniversary next year, and in those 45 years, there have been a lot of changes, but there are some secrets that are still a part of history of this amazing, magical World, and I will highlight 10 of these interesting facts.

1. Imagineers – The names on the second story windows of all the buildings on Main Street are dedicated to the Imagineers who were instrumental in the design and development of Walt Disney World. Walt Disney’s name is written twice, once in the train station right as you enter the Magic Kingdom (Walt Elias Disney—Chief Engineer), and then again at the end of Main Street facing Cinderella’s Castle (Walter Elias Disney—Graduate School of Design and Master Planning). If you study the history of Walt Disney World, you will find it very interesting to look at the names on the windows and how they are identified by the name of the business, for example, one window is dedicated to Frank Well, former President of the Walt Disney Company from 1984 until his death in 1994. The window’s dedication: Seven Summits Expedition-Frank G Wells, President-For Those Who Want To Do It All.

2. Special Effects – Main Street uses forced perspective in the design of all the buildings. The bottom floor is 10ft., the second floor is 9 ft., and the last floor is 8ft. This makes the buildings look taller, and the castle at the end of Main Street. There are two buildings, however, that do not use forced perspective. They are the Town Square Exhibition Hall (it is full scale in order to block the view of the Contemporary Resort which could be seen from the south and east of the park—a no-no for Disney. When Walt Disney envisioned Disney World, he wanted there to be no view of the outside world while in the theme parks. The other building that does not use forced perspective is the Main Street train station, because the upper floor is used by guests.

3. Street Lamps – As you walk down Main Street, notice the street lamps. They start off as gas lamps and end as electric lamps. This represents the development of electricity.

4. A Great Place to Rest – As you are walking down Main Street, just as you pass the Uptown Jewelry Store on the right side, tucked away in a small alcove, are a couple of small tables and chairs where you can sit and relax. As you are sitting there, you can hear a voice singing musical notes and tap dancing coming from open windows with the titles of Singing Lessons, and School of Dance. It is these small details that make a Disney Park so unique and fun to visit.

5. Mickey Ears – Once you have entered the Magic Kingdom, on the far right corner, there is a small store called the Chapeau Hat Shoppe. It is filled with hats of every kind and a large variety of Mickey Ears. One of our favorite things to do here is take pictures of family members in some of the more creative hats or Mickey Ears. If you want to try on hats for the purpose of a photo op only, cast members are glad to see you having a good time. Also, if you ask any cast member if you can get a picture with them, they will happily agree. Another secret about this shop is an old fashioned phone mounted on the wall. If you pick up the receiver, you will hear a conversation between a mother and daughter discussing what they are going to buy at the store, and occasionally a nosey eavesdropper, Miss Klump, listens in and is politely told by the mother to hang up. Have a family member pick up the receiver and watch their faces as they hear the conversation.

6. Tony’s Town Square Restaurant – As you are walking down Main Street, on the right is a popular restaurant called Tony’s Town Square Restaurant, which is themed around the full length feature animated film, Lady and the Tramp. Dining here is like stepping into the movie, with furnishings and items commemorating the movie, including a large statue of Lady and the Tramp in a fountain in the center of this charming restaurant. There are a couple of interesting facts about this unique eatery: At the back of the restaurant, there is a beautiful three-paned dark moonlit meal of spaghetti, and right in front of the main entrance, there are imprints in the sidewalk of Lady and Tramp’s paws.

7. Train Station – In the Main Street Train Station, on one of the shelves, you can see Aladdin’s Lamp as well as other characters’ belongings waiting to be picked up, including an item belonging to Mary Poppins. The telegraph you hear at the train station is tapping out in code Walt Disney’s speech at Disneyland’s opening
in 1955.

9. Train VIP – At the Main Street Railroad Station, if you head for the last car, usually the conductor will choose someone from that car to make the “All aboard” announcement on a microphone. It is a great way to create an awesome memory for anyone who answers the call to be a conductor for a minute.

10. Special Flags– Main Street, USA is filled with Americana, decorated with red, white, and blue banners and flags all year long, except for special holidays, like Halloween, Thanksgiving, and Christmas. Most people do not realize or notice that all of the flags on Main Street have less than 50 stars. This is because flags with less than 50 stars don’t count as real flags and don’t have to be taken down in poor weather or illuminated at night. The one flying at the front of the Park in Town Square, however, does have 50 stars and each day at 5:00pm, a Flag Retreat Ceremony takes place. This brief ceremony includes a live marching band, the Dapper Dans, and an honorary veteran of the day, who is included in the ceremony, presented the flag and is given an official certificate and pin. This is a ceremony that was very important to Walt Disney who was an extremely patriotic person, who loved his country.

There are so many hidden elements of Walt Disney World, and when you use your imagination and knowledge of this wonderful world, you will discover some interesting facts for yourself. Just stop, look, and listen to all the sights, sounds, and smells of this most magical place on earth.