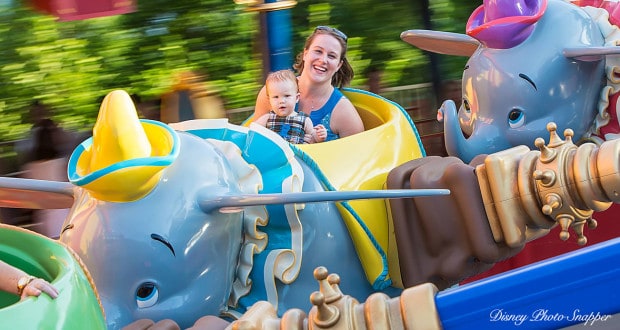 A trip to Walt Disney World in Florida is not complete without a ride aboard one of its most iconic attractions, Dumbo the Flying Elephant. Adults and children alike will enjoy spinning around New Fantasyland, going up and down as much as you please! The vivid colors, the music, the atmosphere, the laughter (and maybe some dizziness) will all add up to a great time of fun for you and your family. But how much do you know about this classic attraction? Here are 10 sensational secrets about Dumbo the Flying Elephant ride in the Magic Kingdom.

1) An original attraction – Dumbo the Flying Elephant was one of the original attractions when the Magic Kingdom opened in 1971. It was modified from the Disneyland version, which had 10 elephants, to include 16 vehicles. On opening day, there was no Timothy Q. Mouse (Dumbo’s pal) and the elephants did not have hats, as we see today. The hats were eventually added after a couple of months, but the Timothy Q. Mouse figure wasn’t added for about two years.

2) You’re the driver! – The ride is based on the character from the 1941 animated feature. The sixteen ride vehicles each resemble Dumbo and are mounted on articulated arms connected to a rotating hub. The passengers ride in the “Dumbos” and can maneuver them up and down with a joystick that operates a hydraulic arm. The ride itself rotates at a constant rate.

3) Pink Elephants? – The ride was designed to represent the pink elephants that Dumbo and Timothy hallucinated about after accidentally drinking champagne in the film. The vehicles at Disneyland were all painted pink — until Walt Disney himself objected and ordered them to be repainted gray.

4) Dueling Dumbos – Magic Kingdom’s Fantasyland underwent a large expansion and renovation that began in 2011. The new Storybook Circus section of New Fantasyland opened in 2012, featuring not one but two Dumbo rides. The dual Dumbo carousels turn in opposite directions so that they meet in the middle plaza and travel out toward the park together. The carousel on the left travels clockwise and is the only circular Disney attraction in the world that does not move counter-clockwise.

5) Parents will love it! – You can now choose an interactive queue (line). Guests in this line are given pagers that hold their places in line as they enter the tent, which is a play area designed for children of all ages. Slides and climbing nets are the basis of this fun area that looks just like the circus in the movie, complete with a pretend burning building and Dumbo flying overhead. There’s even a toddler play area in the center ring. Be sure to notice the spinning vertical puzzle, a nod to the smaller versions that graced the old Dumbo queue. There are plenty of bleachers along the walls for parents to take an air-conditioned break while their kids are playing. When their pager, designed to look like a circus ticket, lights up and Timothy Q. Mouse speaks, it’s time to ride.

6) Better at night – Don’t miss Dumbo the Flying Elephant at night. With its new location, Imagineers have been able to add a water feature below the cars that is part of the attraction at Disneyland, Disneyland Paris and Hong King Disneyland. When the attraction was situated behind Cinderella Castle, water pipes could not be installed below the ride because of the Utilidors (underground tunnels for cast members only). In addition to the fountains, a gorgeous, multicolored light show has been added to the ride. It was modeled after the Disneyland Dumbo, but showcases more colors, making it the most advanced Dumbo show found in Disney parks. Guests who don’t wish to ride will find benches in the center plaza that face each carousel for a clear view of the nighttime show.

7) Top secret – In the circus tent, kids can look for a special rope as they climb up to the nets. Pulling this rope will allow them to start a light show overhead that mimics fireworks, much like the ones in the Royal Guest Rooms at Disney’s Port Orleans resort.

8) The good ole days – For nostalgic visitors, a replica of Magic Kingdom’s 1971 version currently exists at Tokyo Disneyland, being the only park to still feature ten flying elephants and Timothy spinning on a disco ball. It is also the only other park, aside from Disneyland, to have Timothy holding a whip.

9) Picture spot – While it can be difficult to take a good picture of your child while riding Dumbo, be aware that a stationary Dumbo car has a permanent home between the carousels. This is a great way to get a picture. No Disney’s PhotoPass photographer is stationed there, so bring your own camera or smart phone.

10) Don’t miss it! – Although the Dumbo ride lasts only 2 minutes, it remains one of the most popular attractions with the pre-school set. If you have young children in your party, either get a fastpass or go there first.