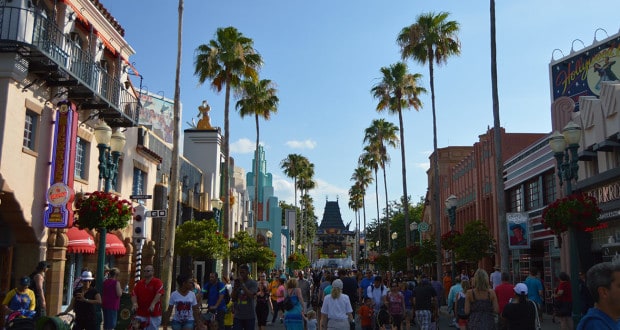 With all of the buzz surrounding Hollywood Studios’ future, many guests are left wondering what’s left in the park and how to navigate it. To help you figure it out, here’s 10 things people don’t tell you about Hollywood Studios.

When making FastPass+ reservation it is important to note that unlike Magic Kingdom and Animal Kingdom, Hollywood Studios utilizes a FastPass+ tier system similar to Epcot’s. There are two tiers, fittingly named Tier 1 and Tier 2. You can pick one attraction from Tier 1 and two attractions from Tier 2 for your initial three FastPasses. After you use those three up you may replace them one at a time.
Tier 1 consists of Toy Story Midway Mania, Rock ‘n’ Roll Roller Coaster, Fantasmic!, Beauty and the Beast- Live on Stage, and The Great Movie Ride. Tier 2 consists of Tower of Terror, Star Tours, Voyage of the Little Mermaid, For the First Time in Forever: A “Frozen” Sing-Along Celebration, MuppetVision 3D, Disney Junior- Live on Stage, and Indiana Jones Epic Stunt Spectacular!

With the FastPass+ tier system in place you may be wondering how to determine what to use your FastPasses on. My personal recommendation is that do not use a FastPass on shows, with the exception of the Frozen Sing-Along. Most shows have plenty of seating and do not fill up for every show, allowing you to get seats without using a FastPass. The one exception is the Frozen Sing-Along due to its popularity and the fact that there is less seating available. If you have young children who are big Frozen fans, this show is a must.

3. Use the Fantasmic! Dining Package

If Fantasmic is a must do for your family consider using the Fantasmic Dining Package. You make reservations at one of three restaurants of your choosing- Hollywood Brown Derby, Hollywood & Vine, or Mama Melrose then you enjoy VIP seating at Fantasmic! It’s important to note that VIP seating is for the first showing of Fantasmic only and it is pick your own seating so plan to arrive early.
If not using the dining package, consider using your initial three FastPasses then going back and getting one for Fantasmic! There’s usually FastPasses left later in the day allowing you to avoid the standby line but still enjoy your three FastPasses.

Rock ‘n’ Roller Coaster is one of the few rides in Disney that offers a single rider line in addition to a FastPass and Standby line. If your party doesn’t mind not sitting side by side and being in different pictures the single rider line is a great opportunity to skip the usually long lines.

Citizens of Hollywood is one of my favorite things to see in Hollywood Studios. The citizens are an improv group that can be found wandering the Hollywood Boulevard area. Since they do improv performances based on the guests around them, no two performances are the same and they alsways provide a good laugh.

Hollywood Studios is home to many character meet and greets, including some characters who are exclusive to that park such as Star Wars and Disney Junior characters. However the characters do have set times they meet so to avoid upset be sure to grab a Times Guide or check the My Disney Experience app.
Hollywood Studios also has a pop up meet and greet known as Characterpooloza. It is not guaranteed to occur everyday but when it does it features a group of characters who meet for a short period of time. Characters and location vary, but its usually by Tower of Terror, Streets of America, or the front of the park.

Toy Story Midway Mania FastPasses are quite hard to come by due to the overwhelming popularity of the attraction. If you cannot score a FastPass arrive to the park at rope drop and make your way over to the attraction. While wait times are usually 30-45 minutes at open since everyone has the same idea it is quite and improvement over the usually hour+ wait times.

To avoid long lines and having to wait for tables I recommend eating lunch earlier or later than normal times. 12-2 is the busiest time for lunch so by eating before or after that you beat the crowds. My favorite quick service location in Hollywood Studios is the Backlot Express because it has indoor air-conditioned seating and you can refill your own cup.

With all the closings and construction it may not seem like a visit to Hollywood Studios is even worth it. However, it is worth a visit because there is still so much to see and do!

With these tips you’ll be navigating Hollywood Studios like a pro in no time!

Kylie is a college student studying psychology and living in New England. She first fell in love with Disney World on her first trip at age ten, where she vowed to be a cast member one day. Ten years later she achieved that dream as a Fall 2014 and Spring 2015 Disney College Program participant. After graduation she plans to return to Disney World as a cast member again and move to Florida permanently.