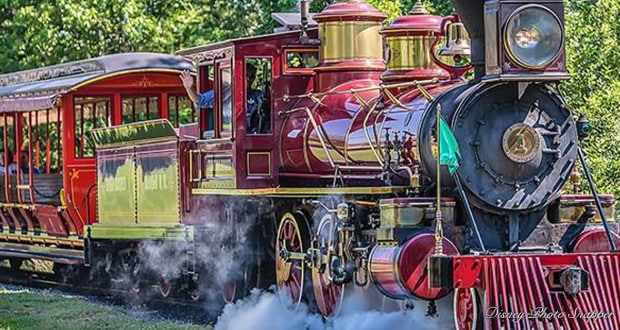 10 Things We Love About the Walt Disney World Railroad

The Railroad at Walt Disney World is a true staple of the Magic Kingdom. Not only is it an attraction, but it is also a wonderful way to be transported to all the different lands throughout the park. There are many reasons why we love the WDW railroad, and the following are my top 10.

10. The sound of the whistle

One of my best memories of my family trips to Walt Disney World is when we would ride the Monorail from the TTC to the Magic Kingdom. When those Monorail doors opened and that train whistle would blow I knew then that it wasn’t a dream and that we really were back. There’s something about that distinctive sound that even today brings up so many wonderful memories about our amazing family trips.

9. The trip around the kingdom

The Magic Kingdom railroad is one of the most classic Walt Disney World attractions and one of the oldest. It has taken the same trip around the Kingdom since opening day. The park has changed quite a bit over the years, but the train loop has basically stayed the same. I love to watch old videos of the train loop to see how much the areas around have changed and what has stayed the same.

Like almost everything at Walt Disney World, the experience at night is very different and amazing. Riding the train loop at night is oh so magical! The sections near all the brush and trees make you truly feel like you’re way out in the wilderness. It’s especially peaceful when the park is about to close and the crowds have dwindled down.

7. Riding in the rain

Rain in central Florida is a pretty common occurrence. When it rains at Walt Disney World it can sometimes be a bummer. A great thing to do when the rain is coming down is to hop aboard the WDW Railroad and take a couple trips around the Magic Kingdom. It’s nice and covered as long as the wind isn’t blowing the rain sideways. The good thing is unlike most other WDW attractions you can stay on as long as you want!

6. The different scenes and scenery

Riding the Walt Disney World Railroad is an experience like no other. You have to really keep your eyes peeled and pay attention or you might just miss something. There are quite a few superbly detailed scenes and beautiful scenery throughout the entire trip.

There are so many wonderful little tidbits and informative historical facts about the Walt Disney World railroad, an entire book could be written on them alone. Each of the 4 trains are so unique and special. Attention to detail and back story are represented remarkably well from the colors, to the style of train, to each individual name and even the style of the passenger cars.

When riding the Walt Disney World railroad, each station feels like you’re being transported from turn of the century America, to the wild wild west and then into the middle of a world of fantasy. Each of the unique stations in the WDW route make the experience extremely believable as only Disney can.

To get the most out of a wonderful Walt Disney World vacation you have to conserve energy and take breaks throughout the day. One good way to do this is to hop aboard the WDW railroad and cruise around the Magic Kingdom. Grab a seat and give those feeties a break!

2. The different audio over the years

The audio for the Walt Disney World Railroad has changed quite a few times over the years with all the changes to the park itself. It’s always fun to search for old audio and compare it to today’s. I catch myself singing along when I watch old home videos and the “Rollin on the Walt Disney World Express” version is playing from the early 90’s!

Walt Disney’s love and fascination of railroads is well documented over the years. Walt’s father and his Uncle both worked for the railroad so he had a direct link from an early age. Mickey Mouse was born from Walt’s imagination while on a train traveling from New York to Los Angeles. He built a 1/8th scale model train that he would ride around his yard. He always knew that if he built a theme park a train would have to be one of the attractions. When Disneyland first opened Walt actually owned the trains himself and ran them under his own separate company, Retlaw. He would even show up every Sunday and take over as conductor for a few hours. The essence of Walt Disney is felt all over the Walt Disney World theme park, but especially at the Magic Kingdom in the Railroad which he held near and dear to his heart.