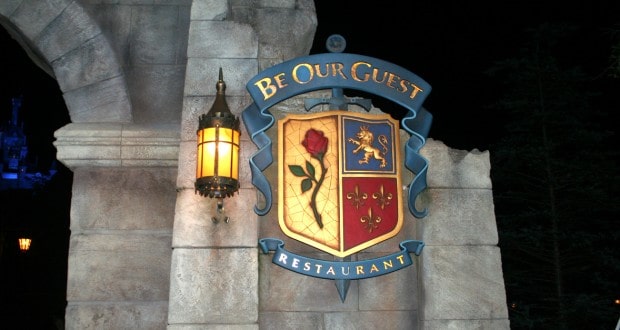 With the addition of the New Fantasyland at the Magic Kingdom, guests now have the opportunity to dine in the “Be Our Guest” Restaurant in the medieval castle from “Beauty and the Beast”. The restaurant is nestled underneath the mysterious castle, passing through an old gateway to a stone bridge and through wrought-iron gates with six beastly figures along the sides. With exquisite theming, guests will feel as if they’ve been transported inside the beloved film. Here are 9 things you’ll love about the “Be Our Guest” Restaurant!

New to 2018, Disney just announced that “Be Our Guest” will be moving to a pre-fixe three course meal starting the end of July. Additionally, the restaurant will be closed from August 20-24, 2018 for refurbishment. No hints just yet as to what is being upgraded, but we’re sure in true Disney fashion it will be amazing!

9) There are three separate dining rooms, each beautiful and enchanting!

Medieval windows extending to the ceiling adorn the delicate Rose Gallery with twirling, larger-than-life figures of Belle and Beast. The dramatic West Wing features an enchanted rose, and the two-story stately Ballroom is styled with a domed ceiling, twinkling chandeliers and views of softly falling snow. No matter where you sit, you will feel as if you’ve become part of the story!

When arriving for lunch, guests are directed through the Armor Hallway, where six suits of armor stand along the wall. Listen closely for an occasional whisper from the metal figures. Did you hear it?

If you are familiar with the film, you know the rose plays a big part in the Beast’s story. In the West Wing, you can watch the rose petals begin to fall, just like in the movie! As each petal falls, claw marks form on the prince’s portrait, changing him slowly into the beast. Will the beast find true love before it’s too late?

As in all Disney films, music plays a big part in the story. In the Ballroom, a 50-piece orchestra recorded the music from the film. The Rose Gallery features special music box arrangements of the same pieces heard in the Ballroom, so that guests moving from room to room will hear the same tune transformed from one style to another. In the West Wing, a somber, melancholy arrangement will be heard.

The Disney Imagineers went crazy with the over-sized portraits of the Beauty and the Beast characters! See Belle, Beast, Mrs. Potts, Chip, Lumiere and more!

4) You’re Definitely In A Castle!

Notice the stunning stained-glass rose chandelier hanging from the ceiling. The stocky candles that flank the middle panel really convey the feeling that you’re in a castle. And check out that gorgeous blue and gold mosaic domed ceiling!

Servers complete the picture, dressed in a style inspired by European fashions from the 1400s to the 1600s: a royal purple embroidered doublet, or vest, over a shirt with knickers that reach just below the knee.