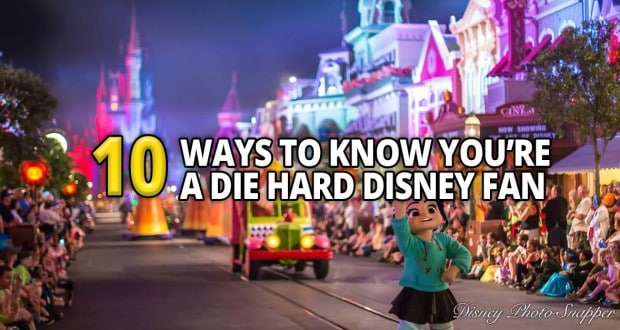 I took my first Disney vacation when I was too young to really remember many details. However, I do remember that I had an amazing time and wanted to go back really really bad. Every trip thereafter I began creating new and wonderful memories that I will hold onto for a lifetime. This in turn spawned somewhat of a Disney obsession that I still hold on to today. I could definitely classify myself as a die hard Disney fan and with that here are my top 10 ways to know you’re a die hard Disney fan!

10. Your picture count after a Disney trip is in the thousands

With technology today it’s not hard to get a little trigger happy with your camera while at Walt Disney World. I can remember my first WDW trip after getting my first digital camera and how I was concerned that the memory card I had could only hold a little over a thousand pictures. Fortunately I remembered to bring my laptop so I could load my pics at the end of each day so my problem was averted. I believe I ended up with around 2000 pics on that particular trip. It truly helps that WDW has so many wonderful photo opportunities. You can never get enough pictures of Cinderella’s castle. It is in fact the most photographed structure in the world!

9. Half your wardrobe has some kind of ties to Disney

I’ll never forget on one of our family Walt Disney World trips in the early 90’s how I saved up all year so I wouldn’t have to settle for just one or two WDW shirt’s. I ended up buying more than 10! That was my whole wardrobe for the rest of that year and even into the next. On more recent trips I usually don’t end up with 10 t-shirts however I do get at least 2 along with some other souvenirs. Between my wife and I on any given day one of us will wear at least one article of clothing with some kind of Disney reference. The best are her Minnie Mouse feetie pajamas with an ear hood!!

8. You think about something Disney every day

No matter if you’re having a not so magical or day or an extremely magical day, die hard Disney fan’s tend to think of something to do with Disney every single day. Don’t be alarmed if you find yourself thinking when your next trip is going to be, or what new Disney movie you can’t wait to see, or how you can’t wait to order that Disney case for your new phone. This is both common and normal for typical die hard Disney fans.

7. Your dream job is to work at Walt Disney World

When I was younger, my cousin and I agreed that one day we would work at Walt Disney World together. It’s been a few years since then and even though he was able to work there for a semester in the Disney College program in 1999, we still talk about working there together someday. We’ll often talk about his time spent there and how it never seemed like work to him. He always tells me how it was the only job that he would get to work sometimes 2 hours early just to walk around and catch a few attractions before heading on over to his post as a scurvy ole pirate on Pirates of the Caribbean. There are so many perks to working there; the main one of them being that you would get paid to be at Disneyworld!!

6. You keep up with everything Disney

5. You have an annual pass and you don’t live in Florida

There are so many benefits to having an annual pass to Walt Disney World including, unlimited entry to all 4 parks and water parks, discounts throughout the resort, various exclusive events and more. To even consider purchasing an annual pass and not live in Florida means that you are anticipating going to WDW on multiple trips. This means that you must be a die hard Disney fan! My family purchased annual passes for each of us in the early 90’s at around $100.00 dollars a piece, (crazy I know). We took a summer trip there for 10 days and had a blast. The only bad part about having that pass was looking at it while at home and knowing that I could go to any park any time I wanted to. I never figured out how to make the almost 1000 mile journey as a 17 year old with no money and no car. I sure did ponder on that one. hahahaha

4. You compare everything to Disney

Have you ever seen a firework show in whatever city you live in and the first thing you think is “That was really nice, but it sure wasn’t Disney”? Have you ever gone out to eat in a nice restaurant and imagined how it would be if Chip and Dale were walking around greeting people? How about going to another theme park and comparing everything to Disney?! This happens often to die hard Disney fans. What makes it so hard is that Disney does everything so perfect so it’s not really fair to compare.

3. You have more books based on Disney than any others

While rearranging my book collection the other day, I began to notice how many books I had that have a tie to Disney in some way. It wasn’t a real surprise that I had a significant amount of books on Disney more so than any other subject. It’s quite easy to start looking at Disney books and finding a plethera of different types covering every aspect that you could possibly imagine.

2. No matter what age you are you can’t sleep the night before a Disney vacation

1.You recognize “Disney” as being more than just a brand

Whenever I see that famous Disney signature, I always get excited and realize there must be something special about whatever it is attached to. It’s more than just a representation of a brand for me, it represents a company that was founded by a man that demanded perfection in all aspects of everything he put his name on. The Disney company has been able to continue Walt’s ideals with everything they do as a company. Cutting corners is not in the vocabulary of anything they represent.

Being a die hard Disney fan is such an honor. I relate my love of all things Disney to some wonderful memories during a time in my life when things were so simple and innocent. I still have the child like experience that all fellow die hard Disney fans know so well while enjoying a Walt Disney World vacation. It’s not hard to understand why there are so many Disney fan’s around the world! Enjoy!

– 12 Of The Coolest Jobs At Disney World