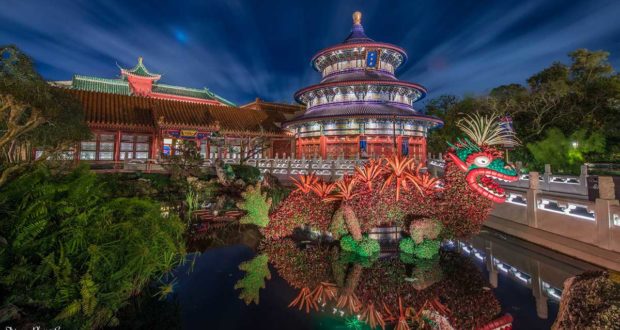 11 Wonders from Around the World at EPCOT’s World Showcase

The World Showcase at Epcot is has long been one of our favorite parts of Walt Disney World. We can’t think of any other single place you can go that allows you to visit nearly a dozen countries from around the world the way you can here. You see, each of the 11 pavilions in the World Showcase represents a specific country. In clockwise order, they are: Mexico, Norway, China, Germany, Italy, America, Japan, Morocco, France, United Kingdom, and Canada. Each one was designed to authentically reflect that country’s culture and aesthetic. They’re even staffed with Cast Members who hail from those countries, respectively. If you’re wondering what to expect when visiting the World Showcase at Epcot, here are 11 of the defining features that can be found in each pavilion, listed in order of country.

The centerpiece of the Mexico Pavilion is an ancient Mesoamerican pyramid. Ascend the steps and head inside this gorgeous structure to discover a folk art gallery, a perpetually twilight-lit “outdoor” Mexican village with its own marketplace, and San Ángel Inn Restaurante, a fantastic table-service restaurant which overlooks the beginning of the “Gran Fiesta Tour Starring The Three Caballeros” dark boat ride, also accessed from inside the pyramid.

The Norway Pavilion is host to a ⅘-scale replica of the famous 12-century Gol Stave Church in Oslo, Norway. This building houses the Stave Church Gallery, an exhibit that currently showcases various aspects of Viking/Norse mythology, including some items which have never been displayed outside of Norway until now.

3. China: The Temple of Heaven

In the China Pavilion you’ll find a ½-scale replica of the iconic Temple of Heaven, which serves as the entrance to “Reflections of China”, a Circle-Vision 360° wraparound film that takes you on a journey through the sights and sounds of China. The building itself was painstakingly designed to replicate the look, feel, and even auditory experience of its beautiful namesake, and it really shows.

The Germany Pavilion is arguably the most “fairy tale”-esque of them all. One might be tempted to name the clock tower or the statue of St. George and the Dragon as this pavilion’s most iconic set pieces, but in our view, the honor goes to the delightfully elaborate miniature village and G-scale model railway found on the side of the walkway as you make your way toward the Italy Pavilion. Take the time to view all of its many details!

We mainly tend to stop in the Italy Pavilion when we’re in the mood for some amazing pizza from Via Napoli Ristorante e Pizzeria. However, one of its landmarks always makes a particularly great photo op: the striking, Baroque-style Fontana di Nettuno (translation: Neptune Fountain), which many compare to the Trevi Fountain in Rome.

As you reach the halfway point around the World Showcase, you’ll find yourself in The American Adventure, home to a large Colonial-style building that houses a popular audio-animatronic American historical show named after the pavilion itself.

As you enter the Japan Pavilion, you can’t miss the five-story blue-roofed pagoda modeled after the one in the Japanese Hōryū-ji Temple, which itself is one of the oldest wooden buildings in the world. Here you’ll often be treated to live music performances by groups such as the Matsuriza taiko drum troupe.

The Morocco Pavilion is the only one in the World Showcase where the country’s real-life government had a personal say in its design and construction. As such, the architecture here is as authentic as it gets. The towering Koutoubia Minaret near the front of the pavilion—modeled after the landmark structure of the same name at Koutoubia Mosque, which happens to be the largest mosque in Marrakesh—can’t help but draw the eye.

Come on, you had to know the Eiffel Tower replica in the France Pavilion would get the mention here. What’s neat about it in this instance is that they used forced perspective to make it appear as though you were seeing the ⅒-scale reproduction in the distance.

If you’re not eating fish and chips or doing some shopping, the United Kingdom Pavilion isn’t one you’ll tend to stop and look at. However, it does have a pretty neat hedge maze you can walk around in. Kids love it.

You’d think the Hotel du Canada building might get our top mention for the Canada Pavilion, but au contraire, my friend—the nod actually goes to the idyllic Victoria Gardens found adjacent to it. They’re inspired by the breathtakingly colorful Butchart Gardens in Victoria, Canada, and are among the largest manicured gardens in all of Disney World.