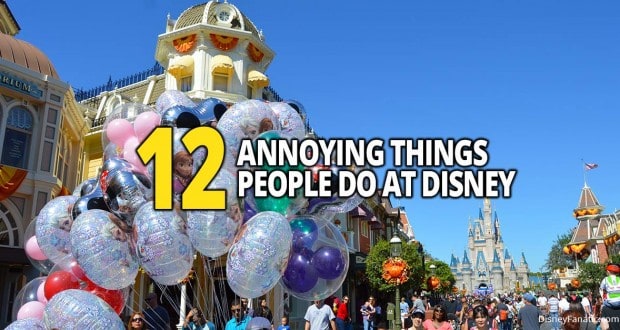 12 Annoying Things People Do At Disney

12. Blocking Others With Large Tablets For Photos and Videos

When you’re in a crowd, trying to view a show, a tablet being used as a camera can really get in your line of vision. Multiple tablets being used as cameras can be even worse depending on your location. Yes, sometimes it is necessary to hold up a phone or camera to get a good photo, but please do not hold it up the entire time (blocking the view of everyone behind you) and pretty please do not use a tablet. Using a tablet just makes the people behind you able to watch the show via your tablet instead of live, and they did not go to Disney World to see it that way.

Asking questions while you order, or making requests based on dietary restrictions are just a couple of instances where holding up the line is acceptable. Holding up the line because you’ve been holding a menu for ten minutes, but still don’t know what to order, is not acceptable. If you don’t know what to order by the time you get to the cashier, simply let the party behind you go first.

10. General Rudeness to Other Guests and Cast Members

This annoyance cannot be boiled down to particular instances, it is just a matter of rudeness in general. Unfortunately, it is all too common for people to feel a sense of entitlement, and this generally becomes worse while on vacation. Everyone else is visiting the parks on vacation just like you, and your rudeness can negatively impact their experience. Even worse, is having rude behavior towards Cast Members, who are working very hard to make your vacation magical.

9. Not Paying Attention while Walking

Have you ever spent a day at one of the parks only to find that you’re constantly dodging people who are about to walk into you? Sometimes people become so distracted with everything around them (which is completely understandable) however this makes them end up in a line of foot traffic where others need to swerve around them to not get hit. If you see something cool looking over to your right, simply move over to the side and stop to look at it. You wouldn’t just keep driving a car while looking off to the side, would you?

8. Not Knowing How to Act on Disney Transportation

Sometimes I get on a bus or monorail, and it becomes very clear which guests have apparently never used public transportation before. If there is a line going around the corner to get onto a bus after Wishes, please do not stop in the middle of the bus. Buses can actually hold a lot of people, and many would much rather stand on a bus, than stand on the sidewalk waiting for another bus. By stopping in the middle of a bus, you are preventing others from getting on, who would fit just fine. The same logic goes for the monorail. I was on a monorail last week where there was myself and four others in the car. On one bench, was two people and three of their bags, and the other had two people with their legs out, while I stood. I gave it a couple of minutes to see if either party would realize that I was standing, but those benches could easily fit five adults, but this did not happen. I ended up asking one of them if he minded holding one of his three bags so I could sit down. Another general rule of public transportation is that your bag does not need its own seat. Another issue with buses and monorails (that I thankfully don’t see too often) is that people should offer their seats to those who need them, (i.e.: seniors and guests with disabilities) but in general I would say that most Disney guests are pretty good about this one.

One of my pet peeves is when people force their children on rides they do not want to go on. Even though it’s not my child, it is still uncomfortable to watch, and can sometimes ruin the experience for others. I’ve seen kids crying and screaming after leaving the stretching room at the Haunted Mansion, which has led to Cast Members offering to show them another way out, however the parents have still put them on the ride. This results in the child screaming through the entire ride, thus annoying everyone else. It’s understandable that kids scare easily, and sometimes they’re going to be quite vocal about it and there’s nothing we can do, however if a child is kicking and screaming in line, loudly stating that they don’t want to go on a ride, then don’t take them on that ride.

6. Reserving Tables in Quick Service Restaurants (or not)

This is a tough one, and does not have as much of a quick fix as the other points on this list. Sometimes, I pick up my food from a quick service restaurant and go off to look for a table, only to find that there are no open tables. What I find instead are people (who don’t have their food yet) holding tables while one person in their party orders food and brings it back. The issue with this is logistical: If there are hypothetically speaking, a few tables with this situation happening, and their party member with the food ordered after me, then I’m standing around with my food, unable to get a table, while their food hasn’t even been picked up yet. This means that in theory, if I were able to get that table instead, I could be done with my food before the next party comes back with theirs. The problem with this is that as long as some people are reserving tables, everyone needs to reserve tables, which makes sense. If you see one open table when you get in line, it makes sense that you would want to reserve it for your party. The only way to fix this is for everyone to stop reserving tables, and just look for a table after they have their food. Since we know that isn’t going to happen, reserve tables if you must, but only as large a table as your party needs.

5. Smoking Outside of Designated Smoking Areas

This one is a no-brainer. Some people don’t mind being around cigarette smoke, others do. With more immune-compromised diseases, cigarette / cigar / vape smoke can be very harmful to others. To make it easier for everyone it is always helpful when people smoke only in the designated areas.

There are so many trash cans within a reasonable distance from any attraction or kiosk at Disney. Even worse than littering, is when people place their trash on top of a trash can. If the can is overflowing (which is a rare sight at Disney!) take the extra few steps to find the next trashcan. They are strategically placed only a few feet throughout the parks.

3. Trying to Keep Their Party Together in the Single Rider Line

The single rider lines help keep attractions running as efficiently as possible while simultaneously creating a shorter wait for guests who want to ride alone. This is momentarily ineffective however when one party goes through the single rider line and argues with the Cast Member at the end that they wanted to stay together. This behavior is then annoying to the other riders in line behind them, who were fully prepared to be split up as single riders, and for the Cast Member who needs to politely explain the single rider system (again) to guests who have the potential to be very rude about the situation.

2. Not Keeping Their Party Together and/or Line Cutting

Line cutters have never, and probably will never be well liked, so even if the rest of your party truly is ahead of you in line, you will be annoying other guests by cutting to meet up with them. Instead of having one person hold a spot in line, make sure your entire party is together before getting in line for an attraction.

In my opinion, taking flash pictures on dark rides is the #1 most annoying thing people can do at Disney. Imagineers have put so much effort into designing dark rides, and they’re meant to be seen in the dark for a reason. Many of the effects in Disney rides work well because of the lighting that is specifically chosen for each attraction. By taking flash pictures in these rides, the illusion is gone, and the experience can easily be ruined for other guests. Though there are announcements that flash pictures are not allowed, it is impossible to stop every single person from taking them. It should also be noted that the flash photos people take do not even come out well—the rides are meant to be seen in the dark, so those kind of photos are not going to be visually appealing. Just as bad as flash pictures, are the lights from cell phone screens. If you must take pictures on an attraction, do so on a camera with the flash turned off. Better yet, I would suggest taking pictures outside of the attraction, and using the time on the ride to enjoy the experience without worrying about photographing every detail.