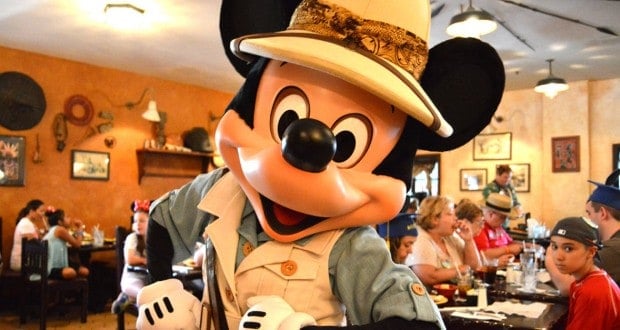 12 Of The Coolest Jobs at Disney World – Part II

They’re always smiling, greeting passers-by with a cheery “how are you today?” Always diligent and competently completing their tasks, they make our time at Disney World Resort oh-so-nice… can you guess who I’m talking about? Yep! That’s right! Our tireless Disney Cast Members. Here is “Part II” it is in no particular order:

1. Disney Reality Show Monitor – Can you imagine being the guy or gal that gets to watch people on various rides around Disney World? Especially rides like Tower of Terror in Hollywood Studios where you get to see the looks on peoples faces as they plunge to their perceived deaths and then end up reliving that moment again a few seconds later. I imagine you’d also see stuff you really wouldn’t want to see as well – like people changing diapers on It’s a Small World, couples making out, you name it! Talk about getting a unique perspective of Disney World. It’s like having your own, reality TV show and you get paid to watch it all day long! It would take a special someone to fill this chair and love it! Which ride you like to be able to monitor? Answer this question in the comments below.

2. Disney Character – These guys have it made! Recently I saw Dug and Russel from Pixar’s “UP” standing in special open-sided structure amongst the beautiful landscaping in Animal Kingdom. with lines of eager children were waiting to see them. Can you imagine stepping out of your persona and becoming someone else for hours at a time? Every child would adore and want to take a picture with you or just get a great big hug. You might get a little warm in those heavy suits but you’d get to take frequent breaks which is an added bonus!

3. Disney Character at a Character Dining Experience – If You don’t like sweating, but still want to be a Disney character, then this gig is definitely for you. Journey from table to table in one Disney’s delightful restaurants greeting children, making fun of parents, and having a grand time! The last time I visited Disney was on my 20th wedding anniversary. While I was sitting at Cape May Café’s character breakfast buffet, checking my iPhone for text messages, I suddenly felt like I was being watched. I turn my head slightly to the left and there was Goofy looking over my shoulder to see what I was doing on my iPhone! Hilarious! Goofy, Mickey and Minnie, Donald and Daisy Duck, Lilo, Stitch – imagine being a welcome addition to the vacation or celebrating birthdays anniversaries and various other notable events in life with families from across the world. No day at work would ever be boring! I wonder if they let you eat some of the restaurant food on your break?

4. Scuba Diver – the sun goes down the Magic Kingdom and the professional divers come out all suited up with oxygen tanks, lights that allow them to see in the dark water and then the treasure, or shall I say trash hunt begins! Did you know that Disney has divers on staff that hit the water most evenings in order to clean up things that visitors have thrown into the various water features in the parks?

5. Professional Bubble Blower – We’ve all seen these Cast Members – their carts full of sparkly doo dads, hoo has, magic wands and bubble guns. The woman I saw on my most recent trip was in Animal Kingdom standing in the shade of beautiful tropical tree just outside of Disney store had a huge smile on her face, a bubble gun in hand, spraying lovely bubbles to the delight of children passing by. You probably earn minimum wage for this job but what could be better then being able to blow bubbles all day long? Best job ever! Maybe I should save this one for when I’m retired and have back-up income.

6. Driver of the Maleficent dragon in Disney’s Festival of Fantasy Parade – set high above the crowd as you navigate your way through Magic Kingdom in the back of maleficent the dragon. This float is by far the biggest crowd pleaser in the parade! Guests look on with stunned amazement at this dark and imposing mythical figure – head snaking up-and-down, and if that’s not enough, you get to push the button to make this dark beauty breathe fire!

7. Tiako Drummer in Epcot’s Japan – You might need to take some aspirin on occasion but just imagine feeling the thunder of these huge drums reverberating as you beat them with synchronized movements and fervor! The three female Tiako drummers that I saw looked like they were in their 30’s or 40’s and were in excellent physical shape. No need for a gym membership if you do this several times a day. I imagine it’s quite stress-relieving and having a sisterhood that all work together to create this thunderous display only adds to the appeal!

8. Jedi Master – use the force in this fabulous job! Train young padawans as you, a season Jedi master, demonstrates the proper use for a light saber and other combat skills. Talk about living a fantasy – this job is for both men and women and other possibly transgender alien species. I’d love to have a Disney World business card with this job title: “Jedi Master!”

9. Balloon Man/Woman – this may be my favorite job opportunity at Magic Kingdom! Imagine the job description for this activity: ‘Disney seeks friendly, helpful individuals. Must love balloons and walking up and down Main Street USA in front of the princess castle. Perks of the job include having instant shade wherever you are from your umbrella-like covering of balloons. And best yet, as the sun goes down the same balloons you carry begin to light up!’

10. Topiary Designer – Got a green thumb? Then this job is for you! Have you ever been to the Epcot’s Annual Flower & Garden Festival? Some of most imaginative works of art I’ve ever seen are the unique sculptures of Disney characters all expressed using live media like bushes, moss, flowers and more. Imagine being able to dream all year sketching your designs for these magical Disney topiaries and then finally bringing them to life just before spring! You’d have a living testament to your horticultural abilities!

11. Friendship Boat Captain – Do you like being on the water? Imagine piloting the brightly colored boat from deluxe Disney resorts to Epcot, Hollywood Studio’s and other points in the parks. Beautifully landscaped and pristine, the waterways around Disney World are truly magical and are somewhat undiscovered country by most visitors into the parks. When I ride the boats, it almost feels like I’m a part of a private, serene world – gliding along sparkling waters to a magical destination. I think my husband has his eye on this job after retirement.

12. Night Watchman in Epcot’s World Showcase – The night is dark and cool. You’re strolling around a sparkling lagoon, shimmering mysteriously under the moonlight. Magically – you’re transported from one country to another in a matter of seconds… Canada, United Kingdom, France, Morocco, Japan, The American Adventure, Italy, Germany, you have all of these exciting destinations at your fingertips. The warm glow of lights from windows fill you with a sense of comfort as you walk unimpeded through Epcot’s World Showcase, minus the hustle and bustle of guests.Some may say this job is exciting but I heartily disagree. For these few hours each night, this corner of Magic Kingdom is yours and yours alone to enjoy. You turn and look over your shoulder and see the Geodesic Sphere glowing in the moonlight, an impressive structure seeming to unite all the countries you’ve just experienced. You sigh and think “what a wonderful world!”

Have you got your eye on a specific job at Disney World? Let us know in the comments below. If you missed it, check out our first edition of “12 Of The Coolest Jobs at Disney World”