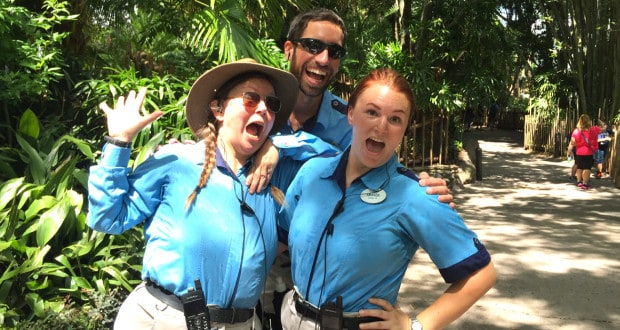 12 Sensational Jobs At Walt Disney World Outside of Magic Kingdom

For many guests, the Magic Kingdom is THE place to go when visiting the Walt Disney World Resort. Of course, this makes perfect sense, as it is the original Florida park, and it tends to be where some of the most magical moments of your vacation will take place. It is important however, to recognize that some of the most sensational jobs cast members can have, do take place outside of this park, and there is so much more than our favorite theme parks alone to make our trips to Walt Disney World so special.

While there are obviously plenty of attractions cast members who do work at the Magic Kingdom, some favorite locations to work in this area are actually outside of the original Florida park. Some of the most sought after attractions to work at include Tower of Terror, and Kilimanjaro Safaris for instance, two amazing rides that are outside of the Magic Kingdom. In addition, many of the show attractions are not located in this park, and shows can be just as fun, if not more fun, to work than a ride. Many rides, especially depending on the position the cast member is working, tend to be busy non-stop throughout the day, whereas shows have a bit more downtime in between performances, which gives the cast members working there more time to interact with guests.

Outside of the Magic Kingdom, or any of the parks for that matter, recreation cast members create magical moments for guests at their resorts. Recreation cast members can work in the pool area, children’s clubs, and watercraft rentals around the resorts. This role allows these cast members to work with guests on a more individual level, and to cater each program to the specific needs of the guests who happen to be at the resort on any given day.

Much like custodial in the Magic Kingdom, this role in general allows the cast members to have tons of interaction with guests in each shift, regardless of where they’re located. Custodial cast members can work at all four theme parks, the water parks, resorts, and Disney Springs. Each location gives custodial cast different ways to make magical moments that are specific to their location– whether it be having fun with the theming at the Polynesian Village Resort by welcoming guests with “aloha,” or dancing along with the music at Disney Springs, custodial cast members are able to make their roles enjoyable even while being away from the flagship park.

Hospitality cast members can work at a number of locations throughout the Disney resorts, including front desk, concierge, and bell services. These cast members are among the first to welcome guests to the resort, as many guests will check into a resort before visiting the parks. Aside from all of the other hard work these cast members do, such as accommodating resort room requests, and making advanced dining reservations, they get to create magical moments from doing something so simple as saying “welcome home,” when guests arrive.

Another cast member role you’d find outside of the Magic Kingdom is housekeeping. These are the cast members who are responsible for maintaining the cleanliness of your room during your stay at a Disney resort. While they might not interact with guests all too often, they are able to create magic for them by leaving fun decorations in the rooms like towel animals.

Parking cast members do not technically work within any of the four theme parks, but they are, like hospitality cast, among the first to welcome guests to the resort. Guests who take their own cars to the parks will encounter parking cast members before anyone else they would take to on a visit to Walt Disney World. While they may not work inside the parks, these cast members play an integral role in setting the tone for the rest of the day, and welcoming guests to the parks while also putting their safety first.

Transportation cast members can play a variety of different roles at the Walt Disney World Resort. From monorail pilots, to boat captains, and bus drivers and bus dispatchers, there are plenty of cast members who together make it possible for you to arrive at the parks efficiently and safely.

When you think of entertainment cast members, you might immediately think of things like the Festival of Fantasy parade or Dream Along with Mickey. There are however, tons of different, and unique entertainment roles outside of the Magic Kingdom, including performers in Broadway style shows, like Finding Nemo: the Musical, and the stunt drivers at Lights, Motors, Action!

Of course, merchandise is not exclusive to any one place at Walt Disney World, but some of the best merchandise locations are not located at a park at all. Many of the resorts have excellent merchandise locations, like the Wilderness Lodge, and the Grand Floridian Resort and Spa for instance, which feature Disney merchandise along with goods that follow the themes of those specific resorts, as well as Disney Springs, which even features the World of Disney!

If you wait to buy your tickets until you get to the parks, you’re probably very familiar with vacation planners. These are the cast members who help you find the right tickets for your vacation, and get you on your way so you can spend more of your time enjoying the parks. Vacation planners have one of the most sensational jobs because they have the opportunity to be among the first to welcome guests to the park each day, and they need to have extensive knowledge of the resort to ensure that they are helping guests to the best of their abilities.

Culinary cast are another group of cast members that work all over the Walt Disney World Resort. While some of my favorite restaurants are located within the Magic Kingdom, I think it’s really important to realize the scope of this role, and how important it is to the functioning of the resort. Culinary cast can work in all of theme parks, water parks, resorts, and Disney Springs, and if we’re being honest here, we all know that they’re responsible for adding tons of magic to each of our trips. Zebra domes anyone?