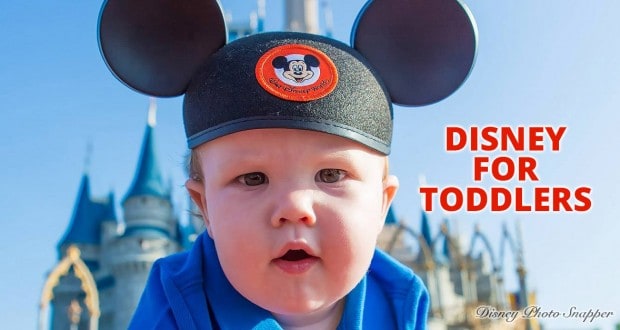 Some people believe that toddlers aren’t old enough to appreciate a trip to Walt Disney World, but I think they’re just plain wrong. Disney has something to offer for all ages, and the toddlers in your group will absolutely LOVE a Disney vacation. Are there attractions that are appropriate for toddlers? ABSOLUTELY! Here’s our list of fourteen tried and true Disney attractions guaranteed to delight your 1 to 3 year old! We’ve even added a few warnings about any potential “scare” factor.

If your little one loves a visit to your local aquarium or is a fan of Finding Nemo, this ride is guaranteed to entertain. This is a slow-moving voyage around the massive Epcot saltwater aquarium, complete with visits from Nemo and his movie friends. At one point, the cartoon images appear to swim in the massive tank with the real sea creatures. It’s an amazing special effect that will delight adults and captivate toddlers.

WARNING: There are a few brief appearances of the sharks from the movie, as well as the potentially frightening angler fish. If your child is fine watching the movie in its entirety, you need not worry about them here.

This Disney classic takes guests on a colorful 10-minute cruise through the “Seven Seaways”, sailing past singing and dancing dolls representing children from diverse cultures all around the world. The well-known and catchy tune plays throughout the ride, creating an enchanting environment. But be warned: the ride can be addictive to the toddlers in your group. My own mother tells tales of being dragged on this ride continuously by my own two-year old self, much to her chagrin.

The Disney version of this classic amusement park ride is truly “charming” in every way. Beautiful horses spin round and round as classic Disney tunes play on the organ. No toddler can resist this attraction!

11. Under the Sea ~ Journey of the Little Mermaid – Magic Kingdom (Fantasyland)

Travel under the sea on this magical journey to relive the story of the Little Mermaid. Guests ride in clamshells and hear the music made famous by the animated movie, sung by audio-animatronic figures of Ariel, Sebastian, and Ursula. This ride is a delightful, colorful experience full of Disney music and magic.

WARNING: Ursula does make a brief appearance in the middle of this ride. She is quite large and may scare some sensitive toddlers.

What toddler wouldn’t love a ride on a choo-choo train? A ride on the Walt Disney World Railroad takes you around the entire perimeter of the Magic Kingdom on an authentic steam train with stops at Frontierland, Fantasyland, and Main Street, U.S.A. The Railroad can be a great asset even for youngest members of your group who aren’t necessarily train enthusiasts. You are welcome to bring foldable stroller (like umbrella strollers) on board. This can save you considerable amounts of walking through a crowded park when it can be difficult to navigate with your stroller. Fantasyland is a popular area of the park for families with toddlers. Just hop on the train at Main Street U.S.A (directly above the main entrance to the park) and ride to Fantasyland!

9. The Many Adventures of Winnie the Pooh – Magic Kingdom (Fantasyland)

If your toddler loves the Disney cartoon version of this classic A.A. Milne character, this ride will be a tremendous hit! Guests board giant Hunny Pots which glide and bounce through the Hundred Acre Wood. Tigger, Piglet, and Owl make appearances throughout this family-friendly ride.

WARNING: I’ve seen a few particularly sensitive toddlers utterly melt down on this ride. There is one area of the ride that involves simulated lightening and thunder. If you have a child who is extremely frightened by a rain storm, you may want to skip this one.

These are basically two different versions of the same ride. Both involve riding in a vehicle that travels carousel-style around a center point, with the added twist of being able to move the passenger vehicle to a “flying” elevation at will. Even if your child does not like the idea of flying high, you can always ride these with the passenger vehicles at the lowest setting. As an added bonus, the Dumbo ride has queue that includes a circus-themed play area, complete with a toddler section!

Though it does not qualify as a “ride”, the Splash ‘N’ Soak Station in the Storybook Circus area of New Fantasyland is a great place to take a break and cool off during those sweltering Florida days. The brightly colored circus-train themed “spray ground” offers cooling mist and water spraying from the mouths of circus animals. Toddlers will love the opportunity to run free in this play area.

Though many of the puns and corny jokes will be lost on Disney’s youngest guests, this 10-minute voyage still has plenty to offer them! This is a smooth, relaxing ride with views of all kinds of animatronic wildlife, including hippos, elephants, and giant butterflies. And your toddler probably won’t even notice they’re made of plastic!

This attraction is similar to Dumbo and Magic Carpets of Aladdin, but with a dinosaur theme. Here’s a tip: If you want to be able to control the height of flight, you need to sit in the front seat of your Triceratop!

Most toddlers are animal fanatics, and this ride will provide views of many living creatures, large and small. Giraffes, elephants, hippos, rhinos, and dozens of other indigenous African species will roam around your safari vehicle during this 18-minute expedition. Though this ride is a bit long, the constantly changing scenery should be enough to keep even the youngest toddlers in your group engaged.

This is a playground like no other! Guests are magically reduced to the size of bugs as they are invited to play in this backyard-themed space. Toddlers will relish the chance to play on the slides, run through tunnels, and climb on the backs of giant ants. On my daughter’s first visit to Disney as a three-year-old, we spent HOURS in this play area. She has continued to request at least a few stops here on each and every trip since then!

Do you want to build a snowman? Well, you can at the Frozen Snowground! And let’s face it. Your toddler has probably been regaling you endlessly with his or her version of “Let it Go” for the past year or so. Why not indulge their “Frozen” fantasies for a while? This is a great place for mom and dad to take a break as well!

A trip to Disney with a toddler would not be complete without a visit (or three) to the Disney Junior Live on Stage attraction. All of your child’s favorite characters will make appearances in puppet form, including the casts of Sophia the First, Jake and the Neverland Pirates, Mickey Mouse Clubhouse, and Doc McStuffins. The audience is invited to get up and dance, pop bubbles, and catch gold doubloons as they fall from the sky. Families with toddlers should not miss this attraction!

Have you ever traveled to Disney with a toddler? Are there any “must-do” attractions on your list that we missed? Leave us a comment!