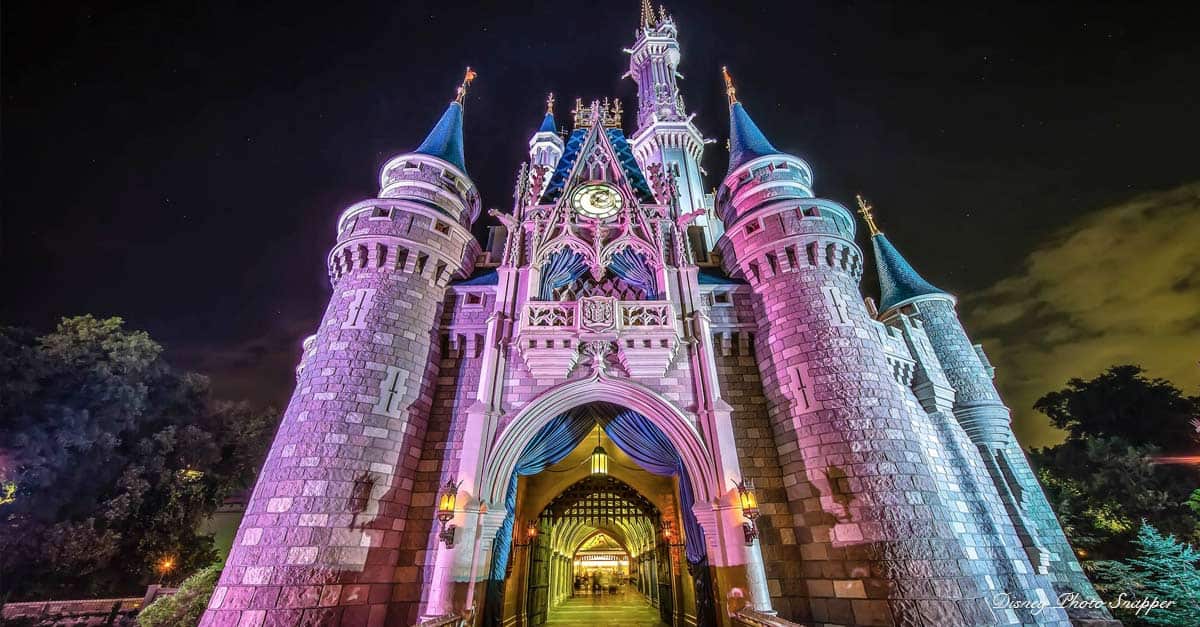 Castles, real or fictional, have always proved to be a fascination, evoking history with all its' havoc, mystery, and romance. From the castles of Versailles and Fontainbleau, the chateaux of Chambord and Chaumont, and even the Tyn Church in Prague, Herbert Ryman chief designer, found his inspiration to design the Cinderella Castle of WDW. The Sleeping Beauty Castle in Disneyland, California, is a Ryman design and also an inspiration for WDW’s iconic Castle.

At the end of Main Street, Cinderella Castle welcomes all who enter the Magic Kingdom. The dream-come-true world begins as all of the Magic Kingdom areas are accessed from the Castle location.

1. After 18 months of construction, the castle was completed in July 1971. It is 189 feet tall measured from the concrete bottom of the water - filled moat that contains approximately 3.37 million US gallons of water. It is 100 feet taller than the Sleeping Beauty Castle in California.

2. Spires soar and ornate turrets and royal blue rooftops lure your eyes to the top of the castle; by using forced perspective. Onlookers are optically fooled into “seeing” a castle much higher than it really is. As the building becomes taller, the design proportions become smaller. With this method, the top spire is actually almost half of its' perceived size. Tops of some spires are painted gold. Spires of Disneyland's Sleeping Beauty Castle are actually gold leaf.

3. There are 27 towers on the castle, numbered 1-29. (Tower numbers 13 and 17 were deleted before construction since they could not easily be seen from anywhere in the park, mainly due to obstruction by other Fantasyland buildings.) The tower with the clock in front is number 10, the tallest is number 20, and number 23 is the other golden-roofed tower. For the better part of 2015, Disney has added an additional 4 turrets to Cinderella Castle extending the lovely panorama!

5. Cinderella Castle drawbridge cannot be raised as can the bridge at Sleeping Beauty Castle in Disneyland.

6. Again, Disney ingenuity fools the eye to believe the castle is made of marble; however, it is made of steel and concrete. Six hundred tons of steel braced frame construction make up the inner structure and is encircled by a ten inch reinforced concrete wall. All of this is on a concrete drilled caisson foundation. Despite the appearance of bricks, none were used in the construction.

7. Most of the exterior is a very hard fiber-reinforced gypsum plaster supported by metal studs. There is much less fiberglass used than is commonly thought. Fiberglass was used for the more ornate exterior walls of the upper towers. Roofs are made of the same type of plastic that computer monitor shells are made from. Towers were raised by crane, welded and bolted permanently in place.

8. It is a popular legend that in hurricane force winds, the castle can be disassembled and moved to safety. As most legends go, this is total myth. It was easier to build the castle to withstand 110 mile an hour winds with more strength to spare.

9. Walking inside the castle archway, one will find five beautiful mosaic murals telling the story of Cinderella. The series was designed by Imagineer Dorothea Redmond and set by a team of six artists led by mosaicist Hanns-Joachim Scharff. Each panel is a 15 feet by 10 feet shaped Gothic arch. Skilled artists took 22 months to complete the murals using over 300,000 pieces of Italian glass in more than 500 colors. The tiles are hand-cut and many are fused with sterling silver and 14k gold. Some tiles are as small as the head of a tack! On your next visit, spend some time enjoying this incredible spectacle!

11. During holiday seasons and special events, the castle becomes the canvas on which a kaleidoscope of lights bring color into synchronization with the rhythm of music and the dramatic explosion of fireworks. Mickey's Very Merry Christmas Party, Mickey's Not-So-Scary Halloween Party, and the Wishes: A Magical Gathering of Disney Dreams are only three of the fabulous evening spectacles enjoyed by WDW guests.

12. Cinderella’s Royal Table lets you dine with Disney Princesses in a fairytale setting for breakfast, lunch, and dinner. It is a most sought after experience, and if you are lucky enough to reserve a spot, this may be your child’s most cherished memory of WDW.

13. Also within the castle is the Bibbidi, Bobbidi Boutique where young guests can be transformed into princesses and knights. Makeover packages include hairstyling, make-up, manicures, costumes, and photos.

14. A Disney family suite was planned, but after Disney died before the park opened, it was eventually turned into a Dream Suite hotel room for special guests, and even as a prize for the Disney Dreams Giveaway. On June 7, 2005, Disney announced the complete redecoration of the suite as a 'royal bedchamber', which can sleep up to six people.

15. Disney describes, in part, the apartment this way in their official press release: "Cinderella's Castle Suite is four stories above the surrounding Magic Kingdom -- a salon, bedchamber and bathroom off of a private marble-floored foyer, all replete with rich details."

16. Fluffy feather comforters beneath the regal canopy draping of two queen beds ... A cut-stone bedchamber floor inspired by the mosaic art masterpiece that adorns the castle's breezeway entrance to Fantasyland ... A parlor sofa that invites kicking off the shoes and curling up to read a chapter beneath the richly detailed vaulted ceiling of the salon ... Familiar castle-gray stone walls, rich hardwood paneling and ornate stained-glass windows.

17. In the foyer of the suite, guests will discover a design of the fairytale pumpkin coach in the marble floor inlay. A memorable artifact from the story, the famous glass slipper, adorns a cove.

18. As a result of the September 11 attacks in 2001, amid concerns that general aviation could pose a threat to public safety, the Federal Aviation Administration placed a permanent Temporary Flight Restriction over the entire Walt Disney World Resort in Orlando, Florida.

19. Cinderella's Castle is used as a visual reference. Law enforcement and Walt Disney World Cessna 172 aircraft, however, are exempt from this TFR.

Cinderella Castle will remain an endearing symbol of the fun and fantasy that is Disney. Every little girl and boy who reads the story of Cinderella and sees her castle will make a memory to last forever.

Start planning your next Disney trip with an Authorized Disney Vacation Planner. They'll help you get the best price for your vacation, share their expert advice and their services are totally FREE!

Left 7 of 7 right
Next: 10 Disney World Rules Everyone Should Follow