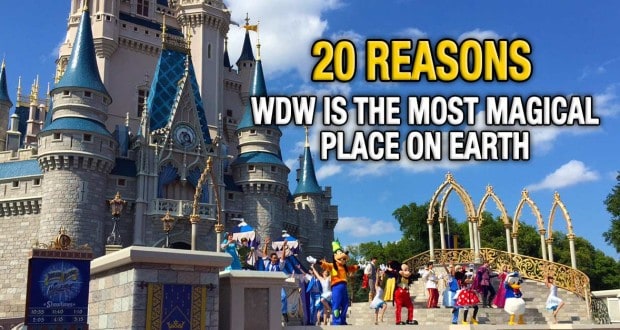 Walt Disney World in central Florida is considered by many to be the most magical place on earth. Why? The reasons are myriad. Here are 20 reasons. Can you think of more?

1) Cast Members – The Disney parks are well-known for their hospitality. The cast members believe that their job is to make your vacation special. You may occasionally come across a cast member having a bad day, but 99 times out of 100, they will greet you with a welcoming smile and go the extra mile to make your day magical.

2) Space – When Walt Disney built Disneyland in California, it was quickly surrounded by the city of Anaheim. When he began to think about his Disney World project in Florida, he wanted to be sure to acquire enough land so that the outside world could not creep in. In all, the Disney Company purchased 43 square miles of land in central Florida. Even today, most of the land remains untouched and there is plenty of room for future expansion.

3) Landscaping – When I first started going to Disney World, one of the things I was most impressed by was the landscaping around the parks and hotels. Flower beds are always colorful and manicured. The grass is green with no weeds in sight. The trees are perfectly trimmed and shaped. I wish my yard looked like that!

4) The Parks – According to theme park statistics, the Magic Kingdom is the most popular theme park in the world. Epcot, the Disney Studios and Animal Kingdom are also in the top 10. Disney World’s two water parks, Typhoon Lagoon and Blizzard Beach also rank among the best in the world. The proof is in the pudding!

5) Icons – Each of the four Disney World theme parks has an icon, or as Walt put it, a “weenie”. He wanted something to draw the guests into the park. There is no more magical moment in a Disney vacation than rounding the corner on Main Street USA and seeing Cinderella Castle in the distance. Everyone knows about the giant “golf ball” at the entrance to Epcot, aka Spaceship Earth. In the Disney Studios, most guests are drawn to the Hollywood Tower Hotel (something about a broken elevator, haha). Finally, one of the most awesome sights you’ll ever see is the Tree of Life at Animal Kingdom. It’s huge!

6) Rides – One thing that sets the Disney parks above other theme parks is the quality of the rides. Disney certainly has its share of thrill rides, but most rides are meant to be enjoyed by the entire family. That was important to Walt Disney.

7) Shows – The shows that are offered at Disney World are top-notch, even up to Broadway standards. Some of my favorites are Finding Nemo: The Musical, Festival of the Lion King, The Voices of Liberty and The Hoop-De-Doo Musical Revue.

8) Fireworks – Veteran Walt Disney World guests know that no matter where you live, your local July 4th fireworks show doesn’t come close to Wishes or Illuminations, both of which are offered nightly.

9) Parades – One of the most magical things you will experience at Disney World is the daily parades. The Magic Kingdom offers two parades almost every day; one at 3:00 pm and one after dark (the night parade sometimes runs twice). The music, the floats, the characters and the lights all make for a spectacular experience! Plus, during the fall, you can experience the Boo To You Parade and the Christmas Parade.

10) After dark – The theme parks are a totally different experience at night! Something about the lights enhances the experience. During the busy seasons, the Magic Kingdom will stay open well after midnight. Plus, in the summer, the temps are much cooler at night.

11) Attention to Detail – Theming and attention to detail are a hallmark of the Disney parks and hotels. Most guests miss the details in their hurry to get to the next attraction. Probably the best example is the Main Street windows in the Magic Kingdom. The advertisements are typical of what you might have seen in 1900 Smalltown USA, but the names are Disney legends.

12) Hotels – There are 20+ Disney-owned hotels at the Disney World resort. Every one of them is themed, clean and well maintained. While you may pay more, staying at a Disney hotel (as opposed to staying off-property) will enhance your vacation.

13) Restaurants – Walt Disney World restaurants serve good, well-prepared food from all parts of the world. While you can find the standard burgers and chicken nuggets, there are many restaurants where you can be adventurous.

14) Characters – Most of us grew up with the Disney characters. Meeting Mickey Mouse is like meeting a celebrity! Opportunities to see the characters abound. You can enjoy a character meal, where Pooh & friends will come to you, or you can queue up to see Tinkerbell.

15) Transportation – When you stay with Disney, free transportation is available to everything Disney offers. Be sure to take advantage of the buses, boats and monorails.

16) Holidays – At least once in your life, spend a holiday at Disney. See the fireworks on July 4th, trick-or-treat at Mickey’s-Not-So-Scary Halloween Party or watch it snow at Mickey’s-Very-Merry Christmas Party.

18) The Disney “Bubble” – When you stay with Disney, you can leave the world behind! Give yourself the opportunity to get away from the daily grind and enjoy your vacation.

19) Never Finished – Walt Disney proclaimed that his theme parks would never be finished. That means that no matter how often you go, there’s always something new!

20) Magical Moments – I’ll never forget one magical moment we experienced. My wife was wearing a birthday button. As we entered Ye Olde Christmas Shoppe in Magic Kingdom, a Cast Member told my wife there was a phone call for her. Puzzled, she took the phone and said, “Hello?” On the other end, it was Goofy wishing her a Happy Birthday! What was your magical moment?