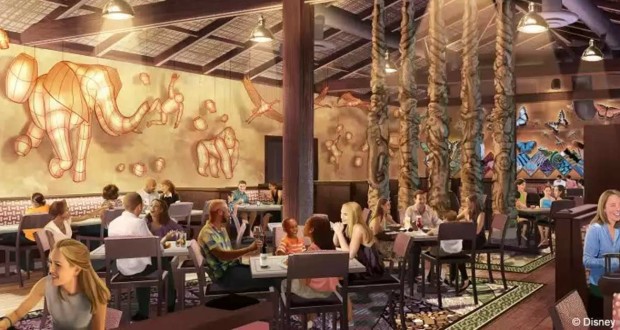 For years, Disney enthusiasts and critics alike have hotly debated the topic of Animal Kingdom’s appeal as a full-day park. Some have said it doesn’t offer enough to fill an entire “rope drop to close” itinerary while others argue that it has much to offer a full-day guest. Well, that debate is fast losing steam as Disney pours millions into Animal Kingdom park. Soon, guests will not only have more to see and do in the daytime, this wild and wooly park will offer a stunning array of nighttime activities to boot! Here are 4fresh nighttime additions coming to Animal Kingdom Park!

4. Tiffins – The Disney blog has announced an all new Animal Kingdom restaurant named Tiffins. It will feature outdoor and indoor seating, views of the waterfront and “a diverse menu drawing from places that inspired the creation of Disney’s Animal Kingdom,” (Disney Blog). Tiffins is slotted to open in 2016.

3. Kilimanjaro Safari’s After Dark – Probably the most thrilling of experiences is an after dark safari ride at this wildly popular attraction. The animals in this attraction tend to take a prolonged siesta mid-day making morning tours of this experience a must if you want to see the lions in particular. A nighttime tour of the savannah promises to be full of fun and action as the animals go on the prowl!

2. Rivers of Light – From Orlando Sentinel: “The new show will take place on the park’s Discovery River between Discovery Island and the Expedition Everest roller coaster, according to a Friday post on the official Disney Parks Blog. During the show, “mystical hosts” will call on animal spirits via water and light.

Expect a metamorphosis in the Tree of Life, the theme park’s centerpiece, which has elaborate animal carvings in its giant trunk. “These magic fireflies kind of open the body of the tree and we look into the tree and we see these amazing stories from the animals that are on the tree,” Imagineer Joe Rohde said in a video posted on the blog. “So moving into the night, bringing the show to life, altering the way people move into the park and adding all these attractions, all of this is connected.”

Puppet designer Michael Curry, composer Mark Mancina and the Disneynature filmmakers have supplied brainpower to the project, Disney said. Curry created the puppets used in Epcot’s Tapestry of Nations parade and collaborated with Julie Taymor for the Broadway musical version of “The Lion King.” Mancina is working on Disney’s animated “Moana,” set for release late next year. He also worked on the soundtrack for 1999’s “Tarzan,” for which he won a Grammy, and more than 40 other films.

Disney World previously had said that “Rivers of Light” would include “live performers with floating lanterns, water screens and swirling animal imagery.”

1. Pandora – The World of AVATAR will bring a variety of new experiences to the Park, including a family-friendly attraction called Na’vi River Journey. The adventure begins as guests set out in canoes and venture down a mysterious, sacred river hidden within the bioluminescent rainforest. The full beauty of Pandora reveals itself as canoes pass by exotic glowing plants and amazing creatures. The journey culminates in an encounter with a Na’vi shaman, who has a deep connection to the life force of Pandora and sends positive energy out into the forest through her music.

Na’vi River Journey will open with Pandora – The World of AVATAR in 2017. According to Yahoo news James Cameron is recently let fans in on some additional details about the Avatar expansion in Disney’ Animal Kingdom Park in Florida. Cameron was quoted, “It’s going to have floating mountains. It’s pretty cool,” says Cameron of “Pandora: The Land of Avatar,” a new theme park area due to open at Florida’s Walt Disney World in 2017. That park name seems to come directly from Cameron. He was speaking at the Hero Complex Film Festival and took the time to release the name and more details about the Animal Kingdom expansion project. “It’s a land within the park but a land is not just a ride. There will be several rides and a number of other attractions. It’s really just a place you’re gonna wanna go and hang out,” the director said, as reported by SlashFilm. “It’s gonna be gorgeous. Of course it’s gonna be gorgeous at night and they’re using every new trick, every new bit of technology that they’ve created.” Check out this video detailing what’s in store at Pandora.

I’ll admit that after getting a photo in front of Cinderella Castle, Animal Kingdom is my favorite park. However, it has often seemed like an addendum that we leave for the last day of our trip amidst packing and preparing to leave WDW. No longer! Now Animal Kingdom will be “in it to win it” so to speak as guests try to decide which nighttime spectacular to enjoy at the 4 different parks. All of us at DisneyFanatic.com are thrilled with these new additions coming to Disney’s Animal Kingdom Park! We’d love to hear what you think about these additions. Share your comments on Facebook.

2015-11-24
Becky
Previous: New Experience Announced For Disney World Resort
Next: 10 Tips for Getting the Most Out Of Your Disney Dining Plan