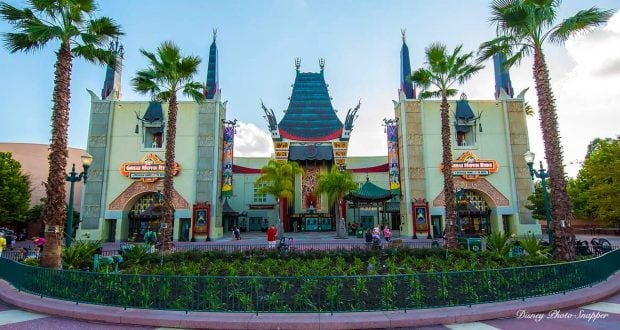 Disney’s Hollywood Studios is quite often looked at as a ‘half-day park.’ People believe that it doesn’t have much to offer in the form of attractions and entertainment, and so they only spend a few hours in the park dedicated to celebrating film and stage classics. While Hollywood Studios is undergoing a significant amount of changes as they begin to construct both Star Wars Land and Toy Story Land, this doesn’t mean that the park doesn’t have much to offer. Here are four reasons why we keep going back to Disney’s Hollywood Studios:

One of the things I love most about Disney’s Hollywood Studios is the table service restaurants because they are so wonderfully themed. From elegant and classy to old-fashioned and heart-warming, these restaurants do a great job of serving you high quality food with high quality service. I love the old Hollywood vibe and decadent menu at the Hollywood Brown Derby, especially for a special night out. I also love the Sci-Fi Dine In Theater, with its unique theming and restaurant setup and classic American menu. The 50’s Prime Time Café is another great option if you want a fun dining experience, and you’re even allowed to watch TV during dinner.

If you’re a fan of the classic franchise, then you are definitely going to keep going to Hollywood Studios. Though Star Wars Land isn’t set to open for another few years, there is still an abundance of Star Wars to go around in the meantime. Guests can ride Star Tours: The Adventure Continues and come face to face with some of the most beloved, and feared, characters of the franchise. They have even updated the ride to include characters from Star Wars: The Force Awakens. Fans of Star Wars can also head to the Star Wars Launch Bay located in the animation courtyard. Inside, they will have the chance to browse through Star Wars merchandise and meet Chewbacca and Kylo Ren.

Disney’s Hollywood Studios does have quite a fun mix of entertainment, though many people choose to skip right over most of it. One of the park’s most spectacular forms of entertainment is Beauty and the Beast—Live On Stage. If you are a fan of the movie and a fan of musicals, this Broadway style show will have you singing and bopping along to the movie’s most inspiring songs. Another big attraction in the park that I, personally, would consider a form of entertainment is the Frozen sing-a-long in the theatre that once housed the American Idol Experience. Two Arendelle historians, who bring the house down every time I see it, bring this fun and enchanting retelling of the story to life. Plus, who doesn’t love to belt out ‘Let It Go’? And we can’t forget about the nighttime show, Fantasmic! Step inside Mickey Mouse’s imagination and see just how powerful your dreams can be, complete with plenty of appearances from your favorite Disney characters. The park has also recently introduced a new holiday nighttime spectacular titled Jingle Bell, Jingle BAM! With plenty of special effects, projections and fireworks, it’s sure to become a family favorite.

For a park so small, Hollywood Studios has a killer lineup of attractions that is only going to get better as it continues to get expanded. People come from all over the world just to experience the Tower of Terror, which is a classic ride that has been helping guests ‘drop in’ since 1994. Hollywood Studios is also home to one of the few classic roller coasters Disney has—Rock ‘N’ Roller Coaster. With high speeds, twists, turns and funky music, this attraction is a must-do during your time in the park. One of the more recent additions to the park, and my personal favorite, is Toy Story Midway Mania, which lets you battle your friends and family in five carnival-inspired games inspired by different Toy Story characters. And, of course, we can’t forget about The Great Movie Ride, which is a must-do for any film fans visiting the park. You get to step inside some of the most iconic movie scenes in film history, and you even get to be part of the show as well. These are only a few of the attractions available to you, but it proves that there are many things that will keep you coming back.

Though many people will try to argue that Disney’s Hollywood Studios isn’t a park worth spending an entire day at, there are many reasons why they’re wrong. With a variety of restaurants, entertainment and attractions, there are plenty of things to do that will keep you and your family entertained all day long. Be sure to check out all that Hollywood Studios has to offer during your next trip.