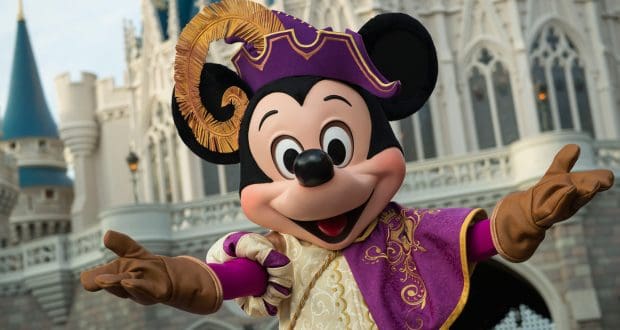 Mickey’s Royal Friendship Faire is the newest stage show at Disney’s Magic Kingdom that has touched the hearts of every guest who has had the pleasure of watching the show since its debut in June. Taking the place of the former castle show, Dream Along With Mickey, MRFF is full of fun, hope and magic, which is exactly what you’d expect from a Disney show! We are already obsessed with it, and here are five reasons why we love it so much!

Mickey, Minnie, Donald, Goofy and Daisy aren’t in their normal, everyday outfits for this stage show. Instead, they are sporting some very adorable medieval costumes in preparation for their friendship faire. The costumes of the dancers are also beautiful, as they were in the former castle show. The costumes really fit the theme of the show, which makes it even more enjoyable to watch.

A good soundtrack will hook me into anything, and this is no exception. Just like DAWM got stuck in many of our heads, I’m sure after watching MRFF a few times, this soundtrack will be imbedded in your brain, too! It’s uplifting, upbeat and features some renditions of Disney movie favorites.

What I loved about DAWM was the random burst of fireworks at the end, and MRFF does not disappoint! Toward the end, a mini fireworks display is put on to celebrate the royal friendship faire and for anyone who loves fireworks, it’s the perfect amount to accompany the show. It’s Mickey’s treat to everyone who has attended his friendship faire and I can’t think of a better way to celebrate!

There are new characters featured in this stage show who were not featured in the last one, which gives guests a chance to see some fresh new faces! Mickey and the gang are joined by Elsa, Anna and Olaf; Rapunzel Eugene and the Ruffians; and Tiana and Naveen. Rapunzel and Tiana have never been featured in a show on the castle stage, making it even more special! Tangled, Frozen and The Princess and The Frog are some of the most beloved recent animated films put out by Disney, so it was definitely a wise move to put them in the spotlight for this show.

There is always a hidden meaning or message behind Disney shows/movies, and this is no exception. I believe the biggest take away is that no matter what walk of life we come from, we can all come together and be kind to one another despite any differences or reservations. It also stresses the importance of leading a life with love and acceptance. It may just be a show at Disney, but I truly think it exudes a lesson that, in this day and age, we all have to learn.

Mickey’s Royal Friendship Faire is already a hit at Magic Kingdom, and it isn’t hard to see why. Between the beautiful costumes, killer soundtrack and special characters, the show is wonderfully done. In addition, the lessons to be learned from it are so important and are a gentle reminder no matter what age you are. The next time you are in Magic Kingdom, be sure to catch the show and let it open up your mind and heart and fill it with kindness, love and magic.