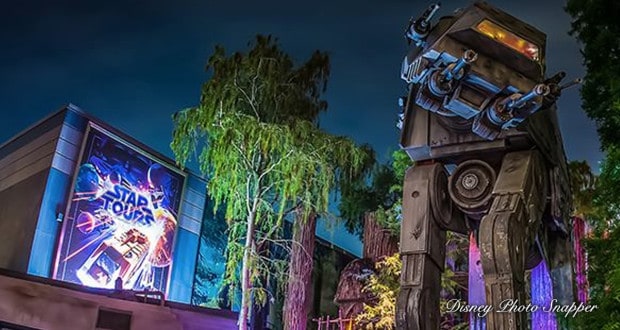 Star Wars is the hottest thing right now and Disney is taking huge steps to increase its presence in Disney’s Hollywood Studios! While ground hasn’t broken yet for Star Wars Land, guests who are fans of the franchise can still be transported to a galaxy far, far away during their trip to the park. If you’re a fan, or even if you aren’t, here are five Star Wars themed experiences that you simply cannot miss the next time you’re in Disney’s Hollywood Studios

Housed in the former Animation building, this Star Wars themed haven is home to meet and greets, merchandise and memorabilia from the movies. Even though I’m not a fanatic like most people are, I couldn’t help but be in awe of the work put into making the area, which truly makes you feel like you’re stepping into one of the movies!

Within the Star Wars Launch Bay area, there are two character meet and greets that fans, young and old, will be delighted to take part in. One is with Chewbacca, who I hear gives the best hugs. The other is with Kylo Ren, the newest villain in the Star Wars franchise. His meet and greet took the place of Darth Vader’s, but I hear he is just as intimidating!

This merchandise area is located near Mike and Sulley’s meet and greet near the Streets of America. Originally put in place for Star Wars Weekends last year, this has become a hot spot for all things Star Wars, whether you want pins, t-shirts or toys.

This guest favorite attraction is a classic that has recently been given an update to coincide with the new film Star Wars: The Force Awakens. There is a new scene that is being played on every starspeeder so that every guest has a chance to experience it, and fans will be delighted that BB-8 is part of it!

1. Symphony in the Stars

Disney’s Hollywood Studios FINALLY has a nightly firework show and let me tell you, it is amazing! This fireworks display is an updated version of the fireworks display by the same name that was introduced during Star Wars Weekends last year. The score is epic and the fireworks are breathtaking. There is no better way to end your day than taking in this masterpiece in the sky!

Even though the park is undergoing some major changes, there are still a lot of Star Wars themed experiences to hold fans over until the new land is completed. The new additions do an excellent job of immersing the guests in the story and introducing young fans to the epic franchise that is Star Wars.