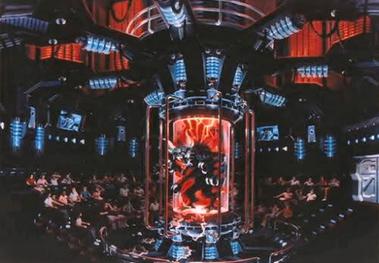 Before Stitch’s Great Escape! lived in Tomorrowland, this similar, but more terrifying, attraction lived in its space. This was one of the few attractions at Walt Disney World, if not the only one, that had a warning outside of the attraction’s entrance which let guests know that the experience was intense and may not be suitable for children under the age of 12. The experience is centered on an alien, which gets loose from the teleportation tube. Guests would feel fluids hitting them, their seats would rumble and shake as the alien made its way through the crowd and they would feel its breath on the back of their necks. The attraction finally closed in 2003 to make way for Stitch’s Great Escape.  Photo credit Wikipedia