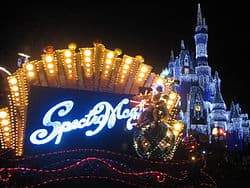 This parade had two wildly popular runs at Magic Kingdom when the Main Street Electrical Parade wasn’t in operation. This dazzling parade featured over 65 performers with more than 45 Disney characters featured in 24 units. There were five different themes, ranging from Sleeping Beauty’s Garden to The Little Mermaid’s Ocean. The parade ran from October 1, 1991 to May 21, 1999 and then again from April 2, 2001 to June 5, 2010. It has since been permanently retired.