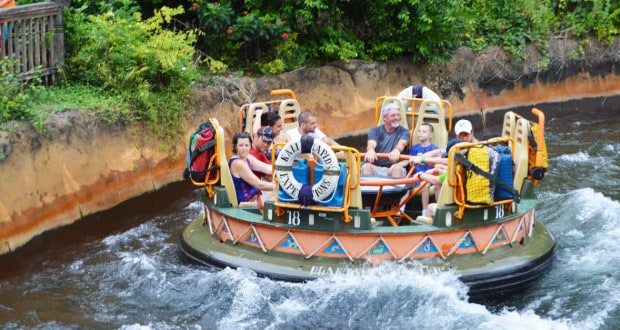 Kali River Rapids in the Animal Kingdom is absolutely my favorite ride in all of Walt Disney World. While others can be found riding Everest over and over, you can find me and my middle child circling back around for ride after ride if the wait time is good. We can’t get enough of the who-will-get-soaked-this-time surprises and the laughter that inevitably ensues. If you’re a Kali fan like us, here are some interesting facts that will take you up a notch to Kali fanatic…

8. Inspiration Innovation – Imagineers at Disney were inspired by the Chakranadi River, in the Harare Province of India, and the ride is intended to give you a sense of going on an actual expedition down the river. Keeping in line with Animal Kingdom’s emphasis on conservation, the ride is also intended to show the dangers of illegal logging operations.

7. Elevation Excitement – The ride begins with your raft going up a 90 foot hill on a big conveyor belt. As soon as you get to the top, the rest of the ride consists of your decent – sometimes slow and winding, and sometimes sharp and quick. The final drop splashes you down 20 to 30 feet. Sources differ on the actual figure, but no matter what, it’s big enough to create a gigantic wall of water that will crash over those “lucky” enough to find themselves at front of the raft.

6. By the Numbers – There are 20 rafts that can circle around the river at any given time. Each raft holds up to 12 riders, and it takes approximately five minutes for each ride. Since opening in March of 1999, Kali River Rapids has only had one safety incident…a minor accident involving six guests and a malfunctioning exit platform.

5. What’s in A Name – Throughout the imagineering process, the working name of the ride was Tiger Rapids Run (similar to Grizzly Rapids Run in Disney’s California Adventure Park, which would come later). Next time you ride, take note of the individual names of the rafts. You might find yourself riding the “Himalayan Hummer”, the “Sherpa Surfer”, or my favorite the “Kathmandoozy”.

4. Scents You Asked – As you go up the incline at the beginning of the ride, breathe deeply. The scents of native Indian jasmine and ginger are infused into the mist as you rise, intending to give you a more authentic experience. Similarly, as you enter the part where the illegal loggers have had an accident, you will smell smoke just like you would if there was a real accident. (Maybe don’t breathe as deeply there, just saying.)

3. Special Effects – In fact, there used to be fire effects in the logging part of the ride. However, they have not been operating for quite some time, and there is no word if they will be turned on again. The attention to detail throughout the ride is still pure Disney though. The flags, the statues, the signage, and the props in the queue (notice the discarded shoes – an Asian tradition) all make you feel like you are literally traveling on another continent. Watch for the hidden tiger behind the first waterfall.

2. Super Soaked – “You will get wet. You might get soaked.” That’s what the sign says before you enter Kali River Rapids. And it’s oh so true. With approximately 150,000 gallons surging through 7 pumps, that is a lot of water and a guarantee that no one is leaving completely dry. However, the words “MIGHT get soaked” rings true in our experience too. Raft members get drenched in varying degrees from “wrecked hair” all the way to “sloshy shoes” and everything in between. Because the raft is circular (and spinning), you never know how wet you’ll be at the end – it’s pure chance. My son likes to win the title of wettest in the raft…so I like him to sit with a stranger on the opposite side, if possible. 😉

1. Follow the Rules – You must be a mere 38″ to ride Kali (music to my two year olds’ ears, since they hardly ever get to ride the “big rides”), but smaller riders will have to get a special wristband and sit with an adult and an additional lap bar. Though the ride is not extremely intense, you will definitely be jostled around, so Disney recommends that you not ride if you are pregnant or have back problems. And of course, keep hands and arms inside the raft at all times.

Take the plunge at Kali River Rapids! And don’t worry about your hair – everyone’s cameras will be safely stowed in the center dry bin anyways. I can’t think of a better way to cool down on a hot Florida day!

Get some quality time with Kali River Rapids and consider planning and booking your next Disney trip with an Authorized Disney Vacation Planner you can trust like Mickey Travels. They’ll help you get the best Walt Disney World deal, share expert advice and their services are totally FREE! It’s genius!