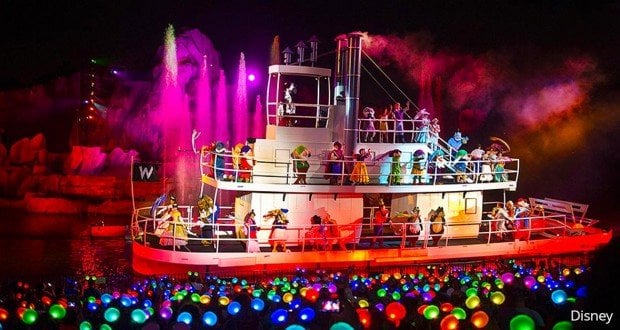 The perfect way to cap off any day at Disney’s Hollywood Studios is to enjoy the nighttime spectacular Fantasmic! Set in an open-air amphitheater behind Tower of Terror, Fantasmic! can host as many as 10,000 guests. The show stars Mickey Mouse, along with a slew of your favorite Disney characters, in a battle of good vs. evil against your favorite Disney villains. Like any good Disney nighttime show, you will experience lasers, fireworks and sound, where you the guest are part of a huge spectacular that will leave you amazed.

9. Fantasmic! debuted on October 15, 1998. The show also has a home at California’s Disneyland, where it has been entertaining guests since 1992.

8. Fantasmic! is a 26-minute show, presented almost every night. During the holidays and peak season, the show is often performed twice in an evening. If possible, take advantage of the second showing of Fantasmic! It’s typically much easier to get a seat.

7. The show stage resembles a mountain, surrounded by a moat. The mountain is 57.5 feet tall, making it the fourth highest “mountain” at the Walt Disney World Resort. The moat holds approximately 1.9 million gallons of water. The water depth varies from 1.5 feet at the mountain to approximately 6 feet in the middle. The show features three mist screens, 50 feet tall and 100 feet wide, each using 800 gallons of water atomized per minute.

6. For each show, there are 46 performers, 25 crew members, 3 stage managers, and 6 cast members responsible for costuming. A total of 78 costumes are used. As you can easily see, this is on par with a Broadway show!

3. Near the end of the show, after Mickey has “defeated” the evil forces of the Disney villains, Steam Boat Willie appears in an 80 feet long boat, which weighs approximately 70,000 lbs, has a 16 foot beam, with up to 26 of your favorite Disney characters on it. The boat is bigger than Christopher Columbus’ Nina, Pinta and Santa Maria!

2. Fantasmic! features some unique elements, incorporating scenes from your favorite Disney animated movies, such as “The Lion King,” “Pocahontas,” “Hercules” and “Mulan.”

1. Guests seated toward the front of the amphitheater are likely to get wet from the mist sprayed by the water screens and from splashes during several scenes. Sitting a dozen or so rows back is probably a wise choice if you prefer to stay dry.

– 10 Sensational Experiences That Must Be On Your Disney Bucket List