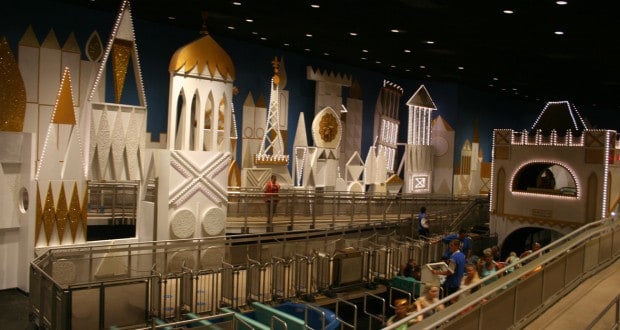 “It’s a world of laughter, a world of tears; it’s a world of hopes and a world of fears; there’s so much that we share, that it’s time we’re aware, it’s a small world after all!” Here are 9 amazing facts about one of Walt Disney World’s most iconic attractions.

1. Walt Disney originally designed this attraction for the 1964 New York World’s Fair. When the Fair closed, the attraction made its way to Disneyland and was so popular that it was one of the original attractions when Walt Disney World’s Magic Kingdom opened on October 1, 1971!

2. The Sherman Brothers, Robert and Richard, originally wrote the theme song as a ballad. Walt told them he needed something “peppy” that would last throughout the ride. It was decided that the song would be sped up and sung as a round. What you see today is very close to Walt’s original attraction for the World’s Fair.

3. The ride’s artist and designer Mary Blair’s original concept for the ride was a vision in stark white and gold. The huge smiling clock face that adorns Disneyland’s version is known to millions as the face of “it’s a small world”. She also created the huge multi-story murals on the Grand Canyon Concourse at Walt Disney World’s Contemporary Resort.

4. A boat will transport you along a 1,085-foot canal for 10 1/2 minutes. You’ll be entertained by 289 audio-animatronics doll figures, 147 toys and 36 animated props. Each room you pass through has a theme, with the audio-animatronics outfitted in clothing and with props that reflect their respective cultures. The major themes include: Europe, Asia, Africa, Central/South America, South Pacific Islands, the Finale and the Good-bye Scene.

5. In the Africa scene, there’s a Hidden Mickey in the purple flowers on a vine on the elephant’s left side. *A Hidden Mickey is a representation of Mickey Mouse that has been inserted subtly into the design of a ride, attraction, or other location in a Disney theme park. The Disney Imagineers do this just for fun.

7. The dolls “sing” the familiar song, “it’s a small world,” in five languages (English, Italian, Japanese, Spanish and Swedish). The song was recorded by a church choir in London, a school chorus in Rome, Italy, TV performers in Mexico City and kids from Tokyo and Burbank, California. It was later spliced together with sounds and styles that represent 25 countries.

8. A clown figure in a hot air balloon in the “Finale” scene was the only frowning figure in the entire attraction — it was apparently removed during the latest renovation of the ride.

9. Finally, the most undeniable fact of all…the theme song will definitely get stuck in your head!!!