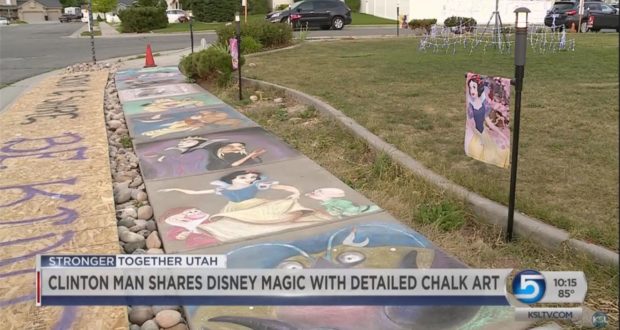 Everyone needs a little Disney magic in their life, and this Utah man is sharing just that! Kelly Hertel from Utah has spent the last couple months turning Disney classics into chalk art. The Most Magical Place on Earth may be closed at the moment, but this Utah neighborhood is getting a dose of pixie dust right outside their homes. Check out the video below!

Kelly Hertel from Clinton, Utah is turning Disney classics into chalk art with scenes from Disney films like Beauty and the Beast, Peter Pan, Frozen, and more.

According to KSLTV, so far Kelly has drawn 32 pictures, each one taking at least 12 hours to complete. Kelly said he’s no artist. I’ve taken no art classes, and I haven’t drawn in over 20 years,” he said. “And when I was on the ship for deployment for six months, that was the only time I ever drew.”

Way to keep the Disney magic alive and well Kelly!

2020-06-14
Jamie Sylvester
Previous: Mickey S’mores: A Must-Have Campfire Treat
Next: Director of “Guardians of the Galaxy” Speaks Out About Cosmic Rewind Attraction Coming To EPCOT