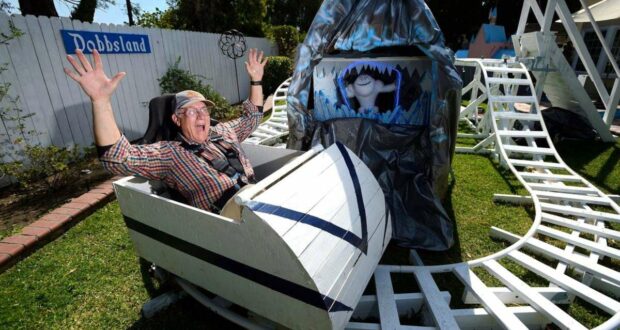 A Grandfather Builds A Backyard Disneyland For His Grandkids

We’re pretty sure if there was ever a “Best Grandfather Ever” Award, it would go to a man named Steve Dobbs. Dobbs, located in Fullerton, California, decided he would construct his own miniature Disneyland in his backyard for his grandkids.

As shared by SFGate: “I watched Disneyland get built,” Dobbs says of his childhood in Anaheim. “This is my Imagineering,” Steve says. Dobb calls this mini-Disneyland “Dobbsland”. One attraction is called “Tiny World”, and is inspired by his wife’s doll collection.

“There’s a Sleeping Princess Castle ride-through, connected on the same track to the Winnie the Pooh ride. They’re both next to a miniature Main Street U.S.A., with M&M Railroad, named after his grandkids, and a movie theatre showing old Disney cartoons.”

“The Star Wars-inspired Starfighters Academy is a two-part dark ride. You sit in a swing inside a Millennium Falcon-shaped structure, and try to hit moving characters with your lightsaber. Then, you take your blaster and attempt to hit light sensors. If you do, the whole place lights up in an interstellar display. “If you use the lightsabers,” Steve says, “you hit the Yoda and he starts talking to you.”

“There’s also a roller coaster! The Madderhorn goes up to 12 mph and pulls 1.2Gs of force for an adult rider. It was a senior project for nine students at Cal Poly. The materials alone cost about $4,500. It’s expensive, Steve admits, “but it’s a lot cheaper than buying it, if you even could.”

“Dobbsland’s newest ride, conceived and constructed by Steve and his 10-year-old granddaughter, is Ruby’s Safari Ride. It takes a page from the Jungle Cruise.