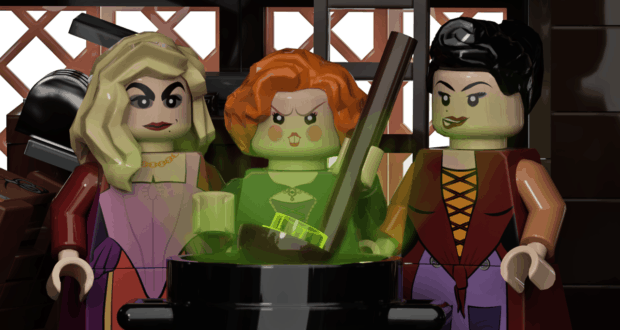 Did you know LEGO fans can submit their own LEGO set design ideas directly to LEGO? Well, one Hocus Pocus fan took on the challenge and their idea has gained 10,000 supporters!

If you have a LEGO set design idea, you can submit it to Ideas.Lego.com. If your idea gets enough votes, it will move into a “Review Stage”. From there, LEGO may take it into a development phase which means it could become a LEGO set for sale online and even at stores.

Well, this Hocus Pocus – Sanderson Sisters’ Cottage LEGO idea has officially reached 10,000 supporters and is now in the review stage! We’re keeping our fingers crossed LEGO gets this one rolling out soon.

Details about the Hocus Pocus – Sanderson Sisters’ Cottage include: “This is the home of the infamous Salem witches Winifred, Sarah, and Mary Sanderson from the 1993 Disney film Hocus Pocus. The set represents the moment when Max Dannison lights the black flame candle. It’s a magical candle made of the fat from a hanged man. If lit by a virgin during a full moon, the spirits of the dead would raise for one night. Green light comes out of the floor and the tiles are shaking. Candles get lit by magic and so does the fireplace, the spellbook opens his eye and then the Sanderson sisters walk back into their home after 300 years, hungry for children’s…ON TOAST! The set consists out of less then 2700 parts. It includes the cottage (50cm high, 45cm wide and 50cm long), Billy’s grave and custom made Minifigures with their attributes.”

The creator of the idea, Amber Veyt from Belgium, says “I think this would be a good set because it can be used as seasonal decoration since Hocus Pocus is one of the most popular and fan favorite Halloween movies of all time and it would be perfect timing for the release of the second Hocus Pocus film coming next year! In 2023 it’s also the 30th anniversary!”

What are your thoughts? Would you be interested in a Hocus Pocus LEGO set?