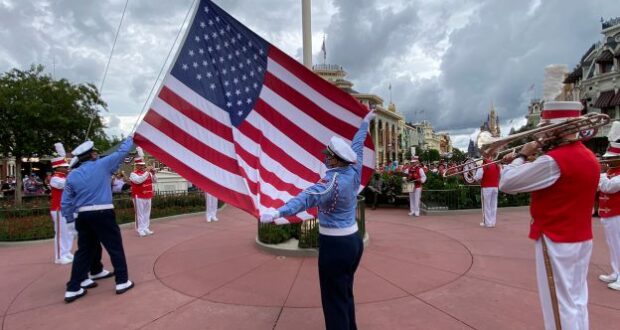 Happy Fourth of July! Disney is sharing exciting news today as a time-honored tradition has made a return to Walt Disney World’s Magic Kingdom. Supporting military heroes is a tradition that dates back to the founding of The Walt Disney Company. Now, Disney has announced they will once again recognize active-duty military and veterans with the return of the daily flag retreat ceremony.

As shared by Disney: “Magic Kingdom Park welcomed back their daily flag retreat July 1, resuming the tradition of selecting an active-duty military member or veteran from among that park’s daily visitors. As shadows grew long in the late afternoon in Town Square, many watched silently as a guest U.S. Air Force veteran joined members of Magic Kingdom’s security team to respectfully lower the flag and carry it in a processional down Main Street, U.S.A. The ceremony included the recitation of the Pledge of Allegiance, and the singing of “God Bless America” and the “Star Spangled Banner,” accompanied by the Main Street Philharmonic marching band. “It has been an honor for our security cast to keep our flag flying every day over Magic Kingdom since the park first opened in 1971,” said Army veteran Eileen Underwood, Magic Kingdom’s senior security manager. “We were thrilled to resume our daily flag retreat ceremonies to honor our country and those who serve around the world in defense of our freedoms. It’s a special moment for all our guests that really reaffirms the feeling that this is truly a magical place.”

The flag retreat ceremony occurs daily at Magic Kingdom. You can visit Guest Services or see a Times Guide for event timing. To the many military heroes out there, thank you for your service and Happy 4th of July!