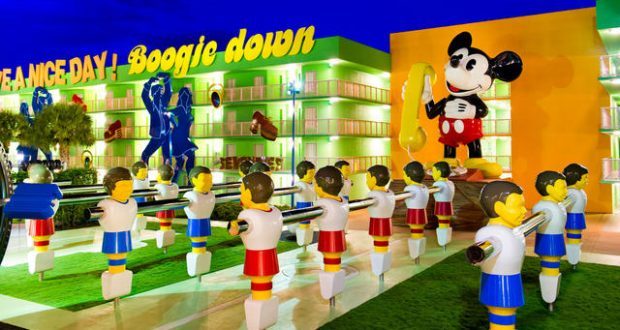 Disney is on the move! We are excited to learn that Cast Members are being called back to work as Walt Disney World prepares for the reopening of 12 select resorts on June 22 and the phased reopening of the parks beginning July 11. As previously posted, a list of locations Cast Members are being recalled to was shared by The Orlando Hotel and Restaurant Works Movement with Local 737 UniteHere. Within the list, a new value resort is recalling Cast Members – Disney’s Pop Century Resort!

The initial wave of recalled Cast Members included the 12 resorts reopening on June 22 including:

Today, the Union had two resort additions to this list for recalls of Cast Members including Pop Century and Coronado Springs. Of course, this does NOT mean those two resorts will reopen on June 22. It does however mean that by staffing these resorts soon, we are hoping their reopening is in the near future.

At Coronado Springs Resort, the Union lists recalls Cast Members for the Barcelona Lounge, Catering Culinary & Stewarding, Food Handlers, Housekeeping, and Stewarding. The addition of Coronado Springs on the list of recalls doesn’t come as a full shock as we have learned the NBA Players will be staying at the Gran Destino Tower and will of course need the Cast Members staffed.

For Pop Century, the recalls are for Culinary & Stewarding, Everything Pop, Food Handlers, and Petals Pool Bar. This would be the first value resort (with the exception of Fort Wilderness) to recall their Cast Members! We’re hoping this is a good sign for future reopening sooner rather than later.

What are your thoughts? Do you think Pop Century will be among the first Value Resorts to reopen? We’ll keep you posted as we continue to learn more!