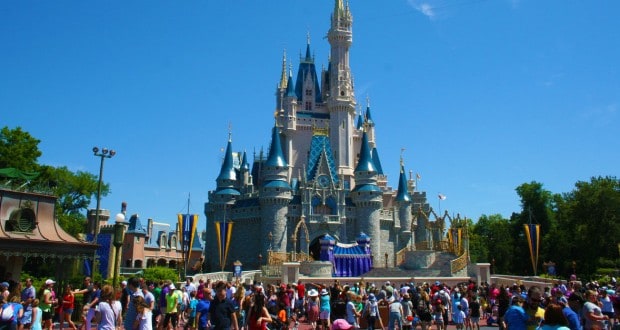 Walt Disney World Resort (WDW) in Florida is a marvel of planning, construction and operation! Encompassing 43 square miles of property, the “most magical place on earth” is a fascinating destination with virtually enumerable delights for kids of all ages. We’ve pulled together a list of amazing facts all about this wondrous destination.

2. 8 million cubic yards of earth was excavated from the 7 seas lagoon to build Magic Kingdom.

3. Surprisingly, there are still 2,000 acres of land open for future development. I wonder what they have in store for us?

5. Would you believe that Disney purchased the first tracks of land for $180 an acre until word got out who was buying the property, then the price went to $1000 an acre. In total, 27,258 acres of land were purchased for just over 5 million dollars.

6. It took 18 months of dirt moving to prepare the site for building Magic Kingdom.

8. Bizarre fact – 7 million pens are purchased by WDW each year.

9. An armored car is the only gas powered vehicle allowed in the Utilidors. These accomplished drivers have to navigate the utilidors with only 4 inches of clearance on both sides upon entering the tunnels.

11. It only takes 20 minutes to fill Splash Mountain and 5 Minutes to drain it.

12. In 1970, Disney developed a system of more than 43 miles of canals and 22 miles of levees to control the water level across WDW Resort.

13. Maximum capacity of Magic Kingdom is an alleged 100,000 guests and the parking lot closes after 75,000 cars have been accommodated in order to leave room for hotel resort guests arriving on buses, boats and monorail.

14. Disney presents over 1,000 firework shows per year making them the largest consumer of fireworks in North America.

17. Hold onto your hats for this one – 72,000 ticket holders at the FedEx Orange Bowl National Championship game in Miami received a surprise free ticket to any Disney theme park in the world to celebrate the 50th anniversary of Disneyland and Disney theme parks.

18. Over 50,000 kids have had a Disney theme park wish granted by the Make-A-Wish Foundation and Disney. Wow! This one makes me love Disney even more!

19. Cast Members wear over 3,700 different costume designs. That comprises a wardrobe of about 1.8 million pieces. Disney produces 13,000 costume pieces each year. It takes 1 million yards of fabric to make all of these costumes. Disney also employs over 500 wardrobe “librarians.”

20. A 132,000 square foot plant in the North Service area is one of the largest completely automated, state-of-the-art laundry plants in the world. Well, they have to wash all those costumes somewhere.

21. At any given time around 160 Disney characters are in costume greeting guests.

23. With around 750 watercraft Walt Disney World is considered the 5th largest fleet of watercraft in the world.

When you read the above, you realize that we’ve only scratched the surface of interesting factoids at Disney World! Every time I author one of these lists I’m amazed at the size and complexity of WDW resort and what it takes to keep the magic going every day! So, here’s a big thank you to everyone at Disney that works so hard to make everything run smoothly and awesomely (is that even a word?). We Disney Fanatics truly appreciate all the hard work!