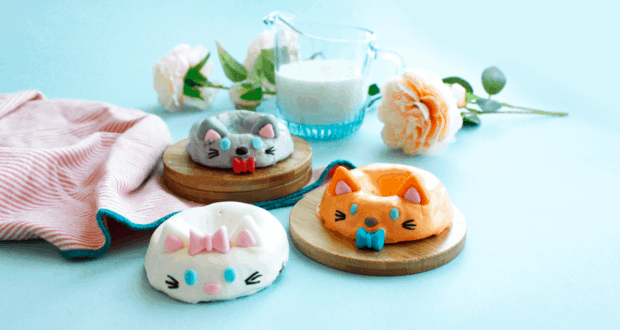 An Aristocats Donuts Recipe That Is The Cat’s Meow!

Everybody wants to eat a donut! Donuts are always a favorite treat, and today DisneyFamily is decorating donuts inspired by our favorite kittens: Marie, Toulouse, and Berlioz! All it takes is a little icing, fondant, and food coloring to transform plain donuts into Aristocats donuts.

2. Place donuts on a cooling rack over a sheet pan. Pour ⅓ cup of the white icing to cover one of the donuts completely. Repeat with the orange and gray icings for the other two donuts. Set aside to let icing dry a little.

3. Divide the fondant into 6 teaspoon-size portions. Dye five of the portions the following colors: gray, orange, pink, black, red, and blue. Leave the last portion of fondant undyed and white.

4. Make the ears: With the gray, white and orange fondant, form little triangles to resemble ears. You will want two ears of each color. For each ear, make a smaller triangle out of pink fondant. Press the smaller pink triangles in each of the larger triangles.

7. Make the whiskers: With the black fondant, form very small tube-like shapes for the whiskers. You will want to make six whiskers for each donut, so 18 whiskers total.

8. Make the bows: Make small bows out of the red, blue and pink fondant pieces.

2020-08-11
Jamie Sylvester
Previous: Take Your Drawing Skills to Infinity & Beyond With a Buzz Lightyear Tutorial
Next: A Yummy Muppets Inspired Ice Cream Recipe