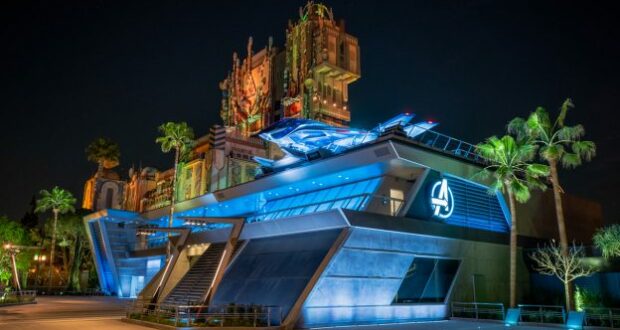 Super Heroes assemble! Disney has announced the highly anticipated Avengers Campus will open at Disneyland Resort this summer! A new attraction, new experiences, new food and beverages, and new merchandise… we simply can’t wait to experience all things Avengers! Check out the first look details and photos below.

As announced by Disney: “Avengers Campus – an entirely new land dedicated to discovering, recruiting and training the next generation of Super Heroes – will open June 4, 2021 at the Disneyland Resort! At this fully immersive land inside Disney California Adventure park, you will be invited to team up with the Avengers and their allies and live out your Super Hero dreams. Avengers Campus is comprised of several heroic locations, each hosted by a different Avenger to share their unique powers, technology and knowledge with recruits.”

On top of the announcement of the grand opening, Disney has also unveiled the first look inside Avengers Campus!

The first key area is the Worldwide Engineering Brigade – also known as WEB. It brings together bright innovators like Peter Parker who have been assembled by Tony Stark to invent new technologies and equip everyday people to become Super Heroes like the Avengers. WEB will house the new WEB SLINGERS: A Spider-Man Adventure, the first Disney ride-through attraction to feature the iconic friendly neighborhood Spider-Man!

Along with WEB Slingers, guests will still have a chance to enjoy the second anchor attraction in Avengers Campus – Guardians of the Galaxy – Mission: BREAKOUT!. Although this attraction opened in 2017, it continues to be a fan-favorite and officially has a home in Avengers Campus, right where it belongs!

All heroes need to power up with delicious food! Pym Test Kitchen is a food innovation science lab where the food and drinks tell a story. Just as Ant-Man and The Wasp use “Pym Particles” to grow and shrink just about anything, Pym Technologies applies this science to the creation of shareable bites, inventive entrees and sweet treats. Adjacent to the Pym Test Kitchen, an oversized beer can overhead signals that grown-up beverage tastings are available at Pym Tasting Lab. You can also visit one of the Avengers favorite food joints at Shawarma Palace, Taneleer Tivan, or Terran Treats.

Want to experience the Avengers in action? Throughout Avengers Campus you can expect to experience Avengers in exciting ways including encounters with Iron Man, Captain Marvel, Black Panther, the Dora Milaje, Black Widow, Ant-Man and The Wasp, the Guardians of the Galaxy, Thor and even villains like Loki, some of whom are making their first appearances at the park. You may even have the chance to witness Spider-Man swinging into action high above Avengers Campus.

At a nearby ancient sanctum, Doctor Strange will train recruits in the mystic arts by bringing this ancient sanctum to life with powerful spells. At night, the area glows even more vividly with majestic colors and lights, pulsating with mystic energy.

And lastly, ready for some Avengers merchandise? Find all the latest items at WEB Suppliers and the Campus Supply Pod.

Let the countdown begin until we reach June 4! We’ll keep you posted as Disney releases more details about the highly anticipated new land. In the meantime, happy planning Avengers/Disney fans!