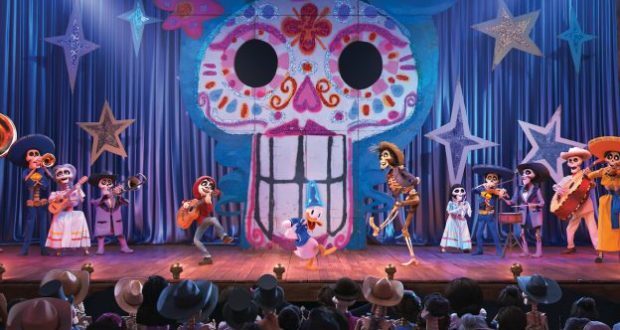 Behind The Scenes Look at “Coco” Scene at Mickey’s PhilharMagic

We previously shared the exciting news that Disney and Pixar’s “Coco” is joining the fun over at Mickey’s PhilharMagic, as the classic attraction is getting a new “Coco” scene! Today, July 17, is a big day at Disneyland Resort and Disneyland Paris as the new scene is now available to experience with Mickey’s PhilharMagic attraction. While guests at Walt Disney World will have to wait until closer to the 50th Anniversary celebration, Disney is giving us a behind-the-scenes look at the designing of the new Coco scene.

As shared by Disney: “Beginning today, guests of the Disneyland Resort and Disneyland Paris can don their opera glasses at the fan-favorite attraction and experience the addition of the musical number “Un Poco Loco,” from Disney and Pixar’s “Coco.” One of the original composers of “Coco” – Germaine Franco – produced a score unique to “Mickey’s PhilharMagic.”

We can’t wait until the scene arrives at Walt Disney World later this year! While Disney hasn’t given an exact date just yet, we do know the 50th Anniversary celebrations kick off on October 1, 2021. We’ll keep you posted as we learn more about a possible debut date at Walt Disney World.